Her parents were killed in a boating accident in 1979, leaving her with an inheritance of $110 million. The death parallels one of her novels, The First Time, written years later, in which a boy kills his parents to see "if he could get away with it". It's implied she herself caused the accident,

She was engaged to a middleweight boxer named Manuel "Manny" Vásquez, who was killed in 1984 during a prizefight in Atlantic City. Openly bisexual, she has many short-lived, empty affairs with people of both sexes, ending when she discards and kills them.

She published best-selling crime novels. It is suggested that the modus operandi of her murders includes using her novels as alibis. She also makes a habit of befriending murderers, including Hazel Dobkins, an elderly woman who stabbed her husband and their children to death for no apparent reason, and Roxanne 'Roxy' Hardy (Leilani Sarelle), her lesbian lover, who killed her two younger brothers with a razor as a teenager. 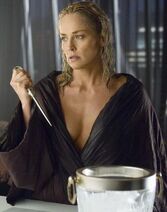 In Basic Instinct 2
Add a photo to this gallery

Retrieved from "https://femalevillains.fandom.com/wiki/Catherine_Tramell_(Basic_Instinct)?oldid=201542"
Community content is available under CC-BY-SA unless otherwise noted.