Start a Wiki
watch 01:48
The Loop (TV)
Do you like this video?
Catherine Benton (Jessica Walter) is the main villainess from "Images," episode 4.05 of Quincy, M.E. (airdate November 2, 1978). She is the estranged and evil twin sister of famed news reporter Jessica Ross (also played by Walter).

The twins' backstories revealed that they were born in a convent and left orphaned due to their mother dying after childbirth and their father not being in the picture. One sister was adopted by the Rosses and named Jessica, while receiving a good upbringing. The other sister was named Catherine (after her and Jessica's mother) and had trouble getting adopted due to being born with a bad heart, but was finally adopted at the age of four. However, Catherine couldn't adjust to her new life and ended up back at the convent.

Catherine was later placed in a home for the emotionally disturbed for years, and one day, Catherine (in adulthood) had her TV on and saw a woman looking exactly like her:  Jessica Ross, her long lost twin sister. Seeing Jessica on TV enraged Catherine, as she was bitter and jealous of Jessica's good life and fame. Catherine decided to take her sister's place, feeling that she deserved the fame that Jessica had, and her plan began with disguising herself and getting hired as Jessica's secretary. Her disguise included a wig, glasses, and high shoes that made her taller, and she also put on some weight as part of her ruse.

Catherine's plan was to study her sister's mannerisms so she could easily replace her without suspicion, and in the beginning of the episode, the evil Catherine appeared at the door of Jessica's motel room and tossed a package inside. The package later exploded, setting off a fire that killed Jessica. The investigation has Quincy identifying the burned body as Jessica Ross, but during his press conference, Catherine enters and introduces herself as Jessica Ross, causing Quincy's reputation and competence to be questioned. Quincy's claim that "Jessica" was an impostor was not believed, and he was enlisted to appear on Jessica's program and admit his mistake. However, Quincy became even more convinced of his belief that Jessica was the murder victim and the other woman was a phony, but the case being officially closed led to Quincy visiting "Jessica" on his own.

Quincy's visit to Catherine/Jessica was also done because the controversy could effect another case he was part of, and he asked "Jessica" to submit to an examination, only for the villainess to refuse and later throw Quincy out. After Quincy left, Catherine looked at a portrait of her late sister and gave an evil laugh--showing glee over her actions and that she is in Jessica's place. Quincy managed to sneak back into the dressing room, only for Catherine to notice from outside and return with police, leading to a restraining order being placed on Quincy.

Quincy was facing losing his job due to his investigation, but seeing "Jessica" clutch her heart after indirectily lashing out at Quincy in her report led to the beginning of her reveal, as well as a necklace that had a young girl dressed in modern clothing (but was supposedly passed off as a young Jessica). Quincy later found out about the convent that the twins were connected to, and with the help of one of the nuns, he found out about the twins being born there--as well as the phony Jessica's real identity. In the episode's climax, Quincy confronted Catherine and revealed her entire backstory and her villainous scheme to kill Jessica, with the villainess denying everything during Quincy's summation and ordering him to leave.

At that moment, Quincy revealed a surprising detail:  Jessica had a daughter, but gave her up due to the fact it was early in Jessica's career and she wasn't ready to be a mother. During this reveal, Quincy let in the nun, who entered with Jessica's daughter (and Catherine's niece), Angela, who Catherine tearfully hugged. Catherine was later arrested (off-screen) for her sister's murder). 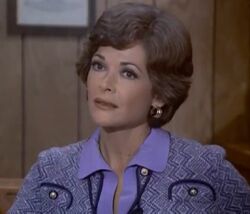 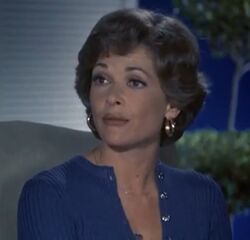 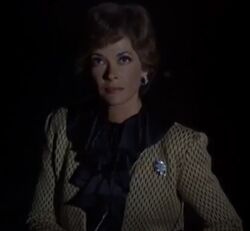 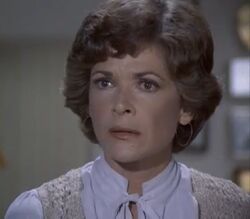 Add a photo to this gallery
Retrieved from "https://femalevillains.fandom.com/wiki/Catherine_Benton_(Quincy,_M.E.)?oldid=131230"
Community content is available under CC-BY-SA unless otherwise noted.