Catherine (Kristanna Loken) is the antagonist in the 2013 movie 'Bounty Killer', which is set in a post apocalyptic world where corporations rule the world.

Catherine is the ex-wife of Drifter, the main character, and is now the boss of Second Sun Enterprises and craves more power. She hunts Drifter, his new girlfriend Mary Death, and their gang to use them for her own purposes, and eventually manages to find them with the help of her henchmen. She wears a braless black pantsuit with her cleavage exposed. However, due to a surprising gypsy attack they only manage to kidnap Drifter and bring him to Second Sun headquarters.

In the headquarters she interrogates Drifter in her office and tries to convince him to join her side. At the same time Mary Death managed to put together a gypsy army and invades Second Sun headquarters. Catherine's office must be soundproof because she doesn't notice the carnage going on around her and still continues to taunt Drifter about how her company will be the only one to rule the world. Finally Mary Death kicks in the office door, much to Catherine's shock. She exclaims "How the hell did you get..." but Mary quickly grabs a suitcase from Catherine's desk and smashes her head against the glass window of her office. Finally Catherine realises the massacre that has been happening behind her back. She gasps an inaudible "Oh my God" and Mary Death knocks her out with a second blow remarking "You talk too much". Catherine reappears moments later still looking a little dizzy from the two blows to her head but she manages to shoot Mary with a pistol. The furious Drifter shoots Catherine with a shotgun, blowing her backwards to slide along the polished floor. Her head is then crushed by the heavy, falling company logo. 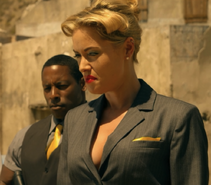 Catherine and her henchmen 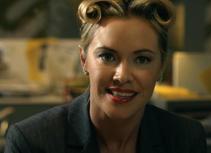 Frustrated by his stubbornness 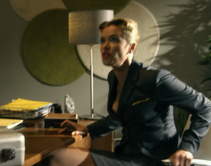 She is surprised by Mary suddenly entering her office

Mary knocks her out 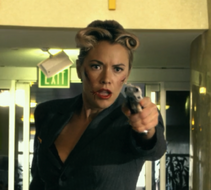 Catherine gets her revenge and shoots Mary...

...but is killed immediately afterwards. Her head is crushed brutally.
Add a photo to this gallery
Retrieved from "https://femalevillains.fandom.com/wiki/Catherine_(Bounty_Killer)?oldid=194769"
Community content is available under CC-BY-SA unless otherwise noted.