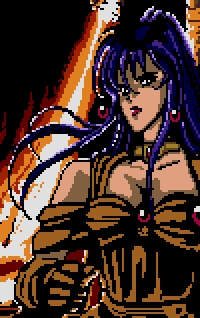 From the ingame prologue:

A long time ago, a sorceress named Castomira lived in a place called Arcus, and she plotted to destroy the whole world. She planned to use her dark magic to remake the world according to her own design. Castomira conquered many lands, and brought chaos to the lives of innocent people everywhere. Many brave warriors died trying to stop her, but only one person had the courage and strength to confront the sorceress...

A good princess, called "Leaty," rose up to stop the wicked sorceress. Leaty commanded the magical powers of light, and brought these forces to bear on Casomira. They clashed in the most powerful battle ever recorded in ancient history.

After days of fighting, Leaty was victorious, and Casomira was confined to the Dark World. In order to seal Casomira's fate, Leaty forged a magical sword that would bind Casomira forever. This sword came to be called "The Power of Leaty." It has been guarded for centuries by the kings of Arcus, and has become a symbol of peace for the people. Now that peace is threatened again, as the power of Leaty has been stolen by the followers of the wicked Sorceress, Casomira grows stronger...''

When the player finally reaches Castomira, she gives him/her a choice to join her. If the player accepts, the villainess laughs evilly and says that they will be sacrificed to the darkness to increase her own power. If the player refuses, a three-stage battle ensues, followed by Castomira being re-sealed by Leaty.

Castomira ravishes a city in the game's opening.

The conclusion in the bad ending...

Add a photo to this gallery
Retrieved from "https://femalevillains.fandom.com/wiki/Castomira_(Arcus_Odyssey)?oldid=183536"
Community content is available under CC-BY-SA unless otherwise noted.