Cassandra Papadakis aka The Oracle is a hidden villainess from Criminal Case: Save the World, the 3rd season of the crime solving game Criminal Case. She appeared in case #4, "Murder is Cheap", before being revealed as a villainess in case #6, "The Impossible Dream" (release date September 24, 2015).

Cassandra was a former professor who later took up a career as a self-proclaimed fortune teller (or "oracle"), living in solitary in a cave. It was revealed in "The Impossible Dream", however, that Cassandra was also a member of the infamous Promethian Cult, who were planning to bomb several European monuments in order to scare the public into voting in favor of European unification.

The player and Jack Archer discovered Cassandra's allegiance to the Promethians while going undercover to infiltrate the cult, investigating the death of author Jacqueline Proust, who died before she could help stop the cult's diabolical plans. Cassandra revealed that she (like the rest of her cult members) believed Jacqueline got what she deserved for her perceived betrayal of the cult and also added that she used to be friends with Jacqueline, but that it ended when Jacqueline stole her thesis in college and used it to write a novel, destroying her career.

Later on, the evil Cassandra also revealed that she had had a hand in Jacqueline's murder, having sent her a postcard asking her to meet at Park Güell, where Jacqueline was ultimately killed by being placed in an iron bull and roasted alive by the Promethians' leader (later revealed to be Archibald Gilchrist). After her confession, Jack asked Cassandra who the cult's leader was, causing her to realize that Jack and the player weren't cult members. At that, Jack unmasked himself and pointed his gun at Cassandra, who was afterwards arrested for her involvement with the Promethians and her role in Jacqueline's murder. 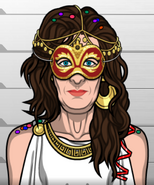 Cassandra as she appears in "The Impossible Dream" 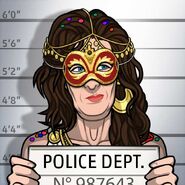 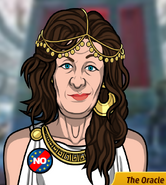 Cassandra unmasked
Add a photo to this gallery
Retrieved from "https://femalevillains.fandom.com/wiki/Cassandra_Papadakis_(Criminal_Case)?oldid=155583"
Community content is available under CC-BY-SA unless otherwise noted.