Cassandra Del Amo is the main villainess from "Deep Cover", an episode from the lone season of the 1990s futuristic series "TekWar". She was portrayed by Marlise Boland(nee Ricardos).

The Del Amo crime family is an old-style(for 2045) Mafia family that dealt in Tek, the drug combatted in the series. Cassandra is the ruthless head of the organization, groomed as the 'heir to the throne' & ascending to the top at age 13 after the (pre-episode) betrayal & murder of her parents by her father's right hand man, Ramon La Vista, as she watched. 5 years later, she got revenge as she first strangled La Vista with her own hands, then strangled his wife as she made their daughter watched, & then killed the daughter as well(didn't explicitly say she strangled her as well). Cassandra now runs all operations with Ian, her younger brother & Michael, her cousin, at her side.

Cassandra & her organization are put on the radar of the security firm Bascom after having an undercover Bascom agent killed after outing him for his incompetence in letting her cousin be apprehended. Bascom, in response, sends Police Lt. Sam Houston in undercover to pick up where the agent left off & stopping them from ransacking a nuclear arsenal for their inventory that would effectively end their opposition. The agent was killed after having his mind probed, so to protect Sam, Bascom has her programmed with an entire second personality that would be primary & only know the undercover backstory as truth if probed. She would have set-up check ins with her partner, Jake Cardigan, to revert back to Sam & update him on the case.

Sabrina Daniels, a criminal lockpick & Sam's created personality, gains her way into the Del Amo fold after breaking Michael, the aformentioned cousin, out of prison & making a deal with him. Cassandra gives her a mind probe & a simulation of a order to kill Michael("Nobody cuts a deal without my approval, not even my cousin"). Sabrina passes the probe & responds by not looking, not hesitating, & even wanting the forcefield(not known/seen until she fired) done away with to complete the job. Cassandra welcomes her into the family.

As Cassandra & Sabrina are bonding after Sabrina's success on a job, Michael alerts Ian to a tip that Sabrina is actually Sam Houston. Ian responds by kidnapping the personality technician & bringing him to Cassandra. She then gives him a mind probe where he divulges everything about Sabrina's programming, including the possibility that Sabrina could usurp the primary personality role permanently, should she miss a meeting with Cardigan. When the technician offers her a deal for more information, she shoots him to death, believing him to be useless & untrustworthy. As Sabrina is loyally a member of the family, Cassandra employs the plan to get rid of Cardigan & manipulating Sabrina in winning out over Sam. Michael tries to take out Cardigan & destroys the machine Jake used to bring Sam back to the front, but is taken into custody.

Despite Michael getting busted, the plan on the arsenal is still a go. When Sabrina & Sam wrestle back & forth in their mind, Cassandra does some manipulating by telling her Sabrina is her true self & how she is a Del Amo, which allowed Sabrina to retain control for the moment. When they arrive to the arsenal, Sabrina & Sam wrestle again, prompting more successful manipulation from Cassandra. Cardigan arrives & intercepts Sabrina from reaching the weapons. They fight, and he is able to bring back Sam after almost choking Sabrina to death. This prompts Cassandra & Ian to come & retrieve her. Cassandra tries a last-ditch effort to talk Sabrina back, but to no avail. Jake grabs a pistol & shoots Ian dead. Cassandra moves to shoot him back in retaliation, but Sam quickly fires first and hits, dropping her to the floor. Sam, emotionally attached to Cassandra due to time of overlap between the two personalities, runs to hear her last words, "I'm coming, Papa". 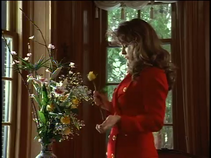 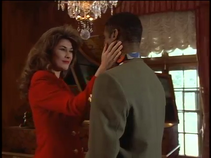 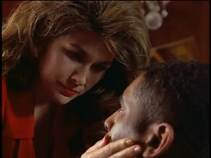 "I guess you'll die an honest man after all." 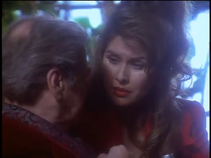 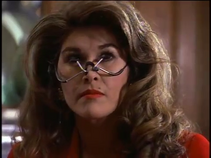 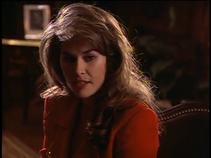 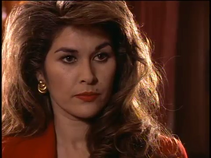 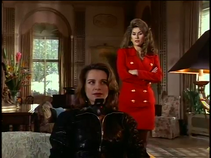 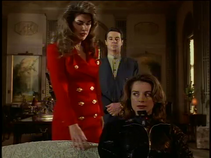 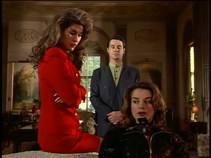 Testing Sabrina before hiring her

"Welcome to the family." 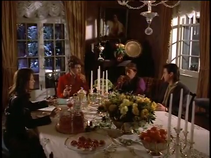 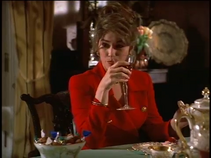 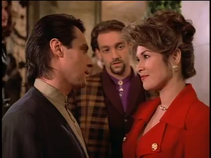 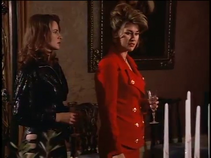 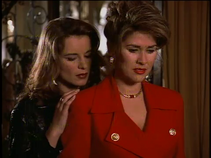 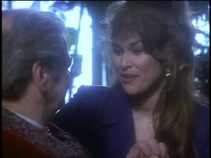 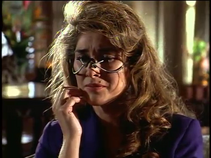 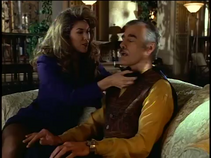 After probing the technician

The technician attempting to coerce a deal... 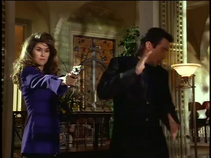 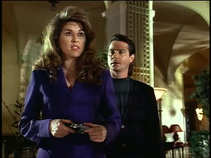 "Trust me, solamente me 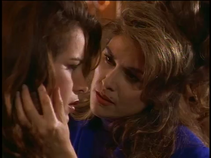 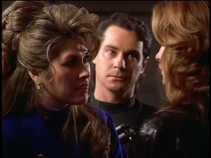 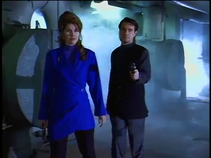 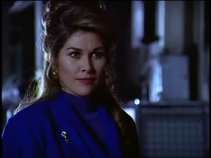 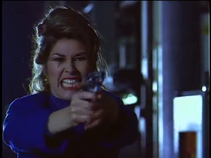 Vengefully getting ready to fire back at Cardigan 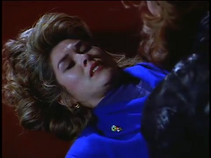 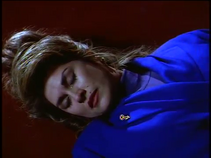 Retrieved from "https://femalevillains.fandom.com/wiki/Cassandra_Del_Amo_(TekWar)?oldid=187595"
Community content is available under CC-BY-SA unless otherwise noted.