Carson Lazarus (Johannah Newmarch) is the main villainess from the second season of Netflix's Project Mc² (airdate August 12, 2016). She is a criminal mastermind and a top agent for HAVOC, a villainous organization that rivals NOV-8.

Carson Lazarus was once a recruit for NOV-8 along with her then-best friend (and current head agent of NOV-8), The Quail. Both Carson and the Quail were tops in their class, until one day, during a wilderness training exercise, Carson suddenly snapped and stole the recruits' food and water rations. As a result of her actions, Carson was terminated from NOV-8, which left her humiliated and vengeful towards the organization, and the Quail

Carson joined criminal organization HAVOC, turning it from a low level group to a massive worldwide threat. During her time with HAVOC, Carson was stealing industrial secrets, until she was caught and arrested by the Quail.

In the second season opener, "Back to Basics," Carson was released from prison after a 10 year sentence, and she was shown correcting an interviewer who identified her male Uber driver as Carson Lazarus. She claimed to be reformed from her evil ways after her time in jail, but in actuality, she was masterminding a plan to shut down NOV-8. Carson's plan included hiring an actor named Kevin Gitterman to pose as a hacker named Retro and send ominous threats against the town. The threats included sabotaging Dr. Tuttle's press conference, attempting to kill a group of criminal hackers, and blacking out the town; all plans stopped by NOV-8's quartet of agents. Meanwhile, Carson got herself hired at a bakery owned by Adrienne Attoms' grandmother, and averted suspicion of being Retro once the actor appeared on TV as the character.

Retro's activities forced McKeyla McAlister to lower NOV-8's defenses as part of a plan to search for Retro's true identity, but that plan played into Carson's machinations, as she managed to get the identities of all of NOV-8's agents, putting them at risk. The climax of the season's penultimate episode, "Bye Bye Birdie," saw Carson listening in on an argument between McKeyla and the Quail (McKeyla's mother) following the events that occurred, after which Carson phoned the Quail and told her that she wanted to see her "frenemy" witness the fall of NOV-8. She added she had a new recruit as part of her plans, and the episode ended with McKeyla turning heel and revealing herself as Carson's newest ally. However, as revealed in the season finale, "Mission Totally Possible," McKeyla's "betrayal" was a front, as she and her mother set up the argument as part of their plan to take down Carson. The villainess later caught McKeyla with Camryn, Adrienne, and Bryden, and later imprisoned the quartet and surrounded the cage with acid. The group managed to escape and finally captured Carson, leading to her being arrested once again.

The final scene of the second season revealed that Mckeyla's older sister, Maddy, was at Carson's lair with a HAVOC uniform, and the beginning of the Season Three opener, "Finding Maddy," had McKeyla and Adrienne grilling Carson in prison about Maddy. Unfortunately for the pair, the evil Carson had no knowledge of Maddy, and all she did was mock Adrienne's bakery and laugh maniacally at the fuming Adrienne. Carson resurfaced in a dream sequence in the beginning of episode 3.03, "Crate Expectations," as McKeyla had a nightmare about the possibility of her sister being evil. The dream had McKeyla wanting answers from Maddy, only for Carson to turn around and cackle at McKeyla. 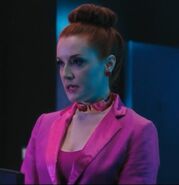 Carson alongside a "heel" McKeyla in "Mission Totally Possible" 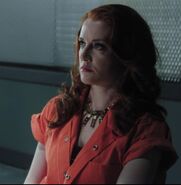 Carson Lazarus in prison
Add a photo to this gallery
Retrieved from "https://femalevillains.fandom.com/wiki/Carson_Lazarus_(Project_Mc²)?oldid=217630"
Community content is available under CC-BY-SA unless otherwise noted.