Start a Wiki
watch 01:48
The Loop (TV)
Do you like this video?
Catherine "Carrigan" Crittenden (Cathy Moriarty) is the main antagonist of the 1995 family film Casper. She is a very spoiled and arrogant woman. She is a very pretty and she knows it. Tall and thin, her hair is a bright blonde color, cut to a shoulder length bob style. She has a very fair skinned complexion and usually wears expensive black pant suits or long sleeve romper jumpsuits.

Carrigan inherits the dilapidated Whipstaff Manor after her father passes away. She is initially enraged that the property is condemned, but quickly changes her tune once she learns that there is a treasure hidden there. The only problem is that the building is haunted by four ghosts: the titular friendly, but lonely ghost: Casper and his uncles: Stretch, Fatso and Stinky.

After various failures to rid the spooks from the place, with a little help from Casper, she gathers information on the News about Dr. James Harvey (Bill Pullman), an "afterlife therapist", and has him hired. Carrigan and her partner Paul "Dibbs" Plutzker (Eric Idle) watch James from afar while they work, pondering all the while of how they can obtain the treasure. They find their solution once Casper, reveals that his father had invented a machine which can bring the dead back to life.

Carrigan quickly plots to murder Dibbs, so that he can fly through walls in his "ghost" form and retrieve the treasure for her. He, on the other hand, is not too fond of her idea, and attempts to get away. Carrigan soon tries to run Dibs over with her car, again narrowly avoiding the vehicle Dibs also manages to crack the windshield with a piece of loose cement obstructing her vision as she accelerates towards the nearby woods. Her car hits a tree setting off the airbag further angering the spoiled heiress. Not realizing that her automobile was ceased, half hanging over a cliff side, an enraged Carrigan steps out and begins falling to the jagged rocks below screaming to her death

Moments later, Dibs wanders out to crashed vehicle, door open and no Carrigan in sight. Realizing she has unintentionally fallen to her death. He shouts out over the cliff,"Carrigan!!??.........CAAARRRIGAN!!!?? Are you a ghost yet.?" Hearing nothing but silence, he assumes the woman is dead and is only saddened by the fact that she had his favorite pair of sunglasses. An uncaring Dibs turns to walk away, until Carrigan's ghost appeared from behind as she finally rises from the bottom of the cliff blocking out the moon and a familiar raspy but much much louder voice bellows,"Not so fast little man! The Bitch is back!!" Dibs turns in terror and shock at Carrigan's new appearance.

Carrigan flies down into the lab startling an unsuspecting Casper and his friend: Kathleen "Kat" Harvey (Christina Ricci), who is also James' daughter, and zooms right through the vault door. Retrieving the chest as planned, Carrigan opens the vault from inside flying out laughing wildly, treasure chest clasped in her arms. Casper quickly jumps up to yell at her stating that it's his treasure. Carrigan leans in close to Casper and rattles,"you mean MY Treasure!!" A very shocked Kat gets up and asks almost rhetorically, "Miss Crittenden?!" As if to wonder if she was hallucinating. Kat had gotten quite used to the sight of ghosts in the last few days but Carrigan looked different from the other ghosts. Her ghost was a dramatic caricature of her former living self. She had bright blonde hair, shiny deep red lipstick, black eyeshadow, long thick black eyebrows, a black body suit fitting to a very curvy ghostly figure with a large bust, an unaturally small waist and large butt going all the way to her ghostly tail and bright red nail polish On her white four fingered claw like hands. Carrigan quips back to the young girl,"In the flesh!!!" and her expression goes from anger to a sly smirk,"well in a couple of minutes, anyways." She cackles loudly seemingly humored by her own death and Kat's rather shocked interest in her new appearance. Carrigan continues to laugh wiping her head back, blonde hair moving with every snap of her head and quickly returning to its classic bob shape. Her eyes shut, black eyeshadow gave a sinister look and her right hand on her chest, bright red nails contrasting against her translucent white skin. A rather goofy noise erupts from behind Carrigan interrupting her self satisfying humorous moment. She turns to see an embattled Dibs riding down on the up and at em machine. Smiling, that her cohort had finally arrived, she flies up to Dibs and hovers over him as he slowly rides the tracks. Carrigan continues to berate Dibs for meaningless stuff until he tells her that he is here to help her. The tall long blonde ghost in a bout of ghostly amnesia doesn't understand. He shows her the Lazarus capsule helping her remember that she would probably want to come back to life. When Casper and Kat challenge Dibs for stealing the capsule. Carrigan quickly tells them, they can sue her and demands the capsule. The innocent duo race upstairs away from the evil woman to regroup.

Upon returning back down to the lab, Carrigan startles Casper and Kat by popping out of the Lazarus claiming that it is her turn in the oven, She turns to Dibs and rudely bellows for him to bring her the capsule and work the machine. Dibs takes this as the last straw, as Carrigan now essentially wormfood, he claims to her that he has the treasure and power and that she is dead and he intends to keep it that way. He fakes that he is gonna break the capsule. Carrigan seeing him start to throw her only chance at efer being alive again, Gasps and yells at him for being ungrateful saying she will never forget this. Dibs dosent care if Carrigan's ghost haunts him since he plans to use the treasure to buy a big house and dog just to spite her. She angrily punches him out of a lab window and catches the capsule. assuming she again has the advantage. Carrigan arrogantly turns to Casper and Kat asking,"Any other takers!?" Daring them to challenge her. Casper asks Carrigan if she is forgetting anything. Angrily she replies,"WHAT?!!" in a raspy voice, as if he had anything on her. Casper asks her about her unfinished business, but Carrigan doesn't know what he's talking about. Kat explains that all ghosts have unfinished business, which is what keeps them from crossing over to the afterlife. Carrigan, not understanding the duo's sly plan quickly disagrees. she says,"Unfinished business? I have no unfinished business, I have my mansion, my treasure. I have everything. Im just perfect." she again starts laughing assuming victory. Her red nailed claws clenching both the treasure and the capsule. Just then a bright white beam of light shoots from her body stopping her moment of triumph. A look of fear quickly takes over Carrigans white face. Another beam pops out. Terrified at what is happening to her, she looks back and forth at the beams coming out of her black body suit her blonde hair brushing over her white shoulders. Now realizing that her admission is causing her to cross over into the afterlife, Carrigan tries taking back her statement,"wait, wait, I, I have unfinished business, lots of unfinished business. i'm not ready to cross over yet!" More and more beams pop out of the woman's body. Casper and Kat exchange a sly smirk of success to one another and continue watching. Begging, claiming that she isn't ready to cross over, meaning that she would remain dead forever. She berates the duo for tricking her before she finally explodes in a flash of light crossing over to the afterlife for the rest of eternity never able to return. In a quick moment of satire, the treasure chest is opened revealing an old baseball and mitt, making Carrigan's death all for nothing. Carrigan is quickly forgotten about by the Harveys and they inherit her property by default. 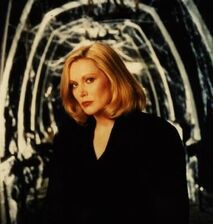 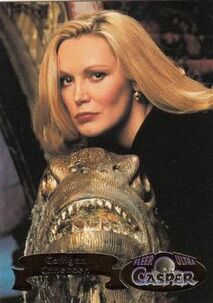 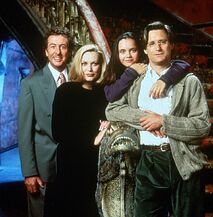 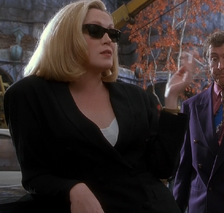 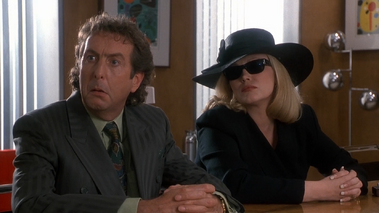 Carrigan and Dibs at the reading of the will. 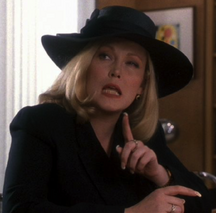 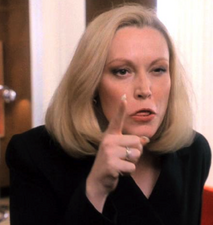 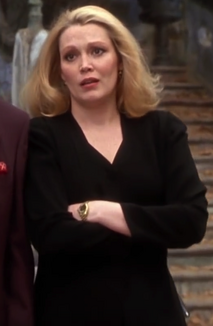 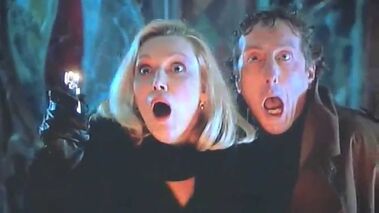 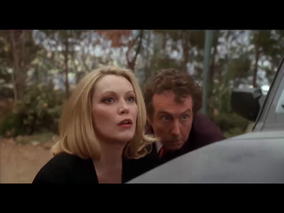 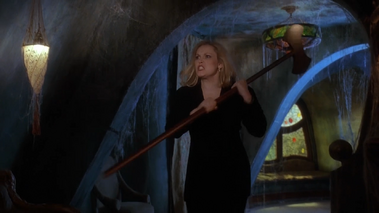 Chasing after her partner both on foot... 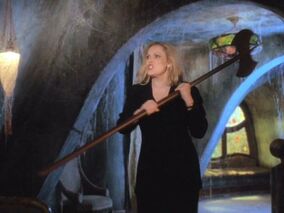 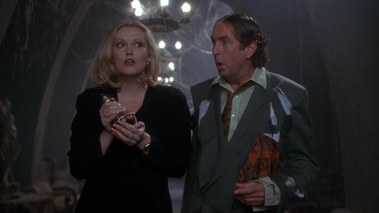 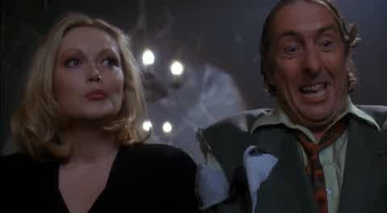 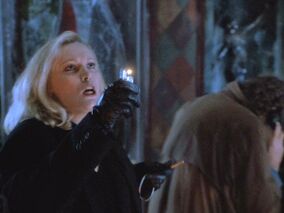 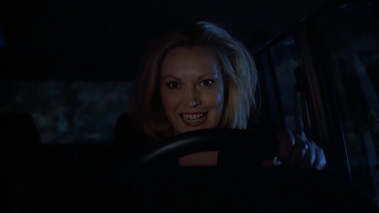 ...and behind the wheel. 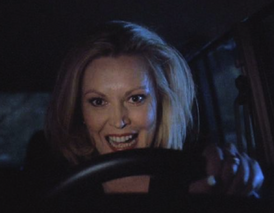 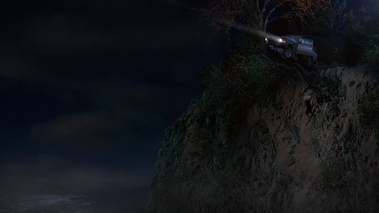 Unfamiliar with the addage, "look before you leap". 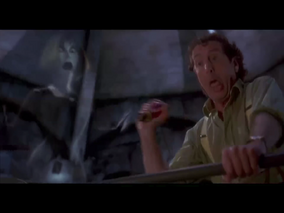 Carrigan's face as dibs threatens to brake the vile of reanimation fluid which would cause her to remain a ghost forever. 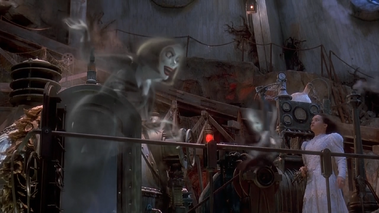 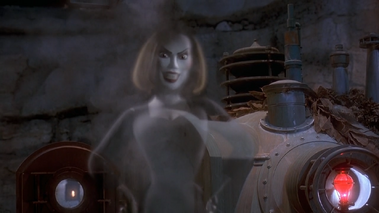 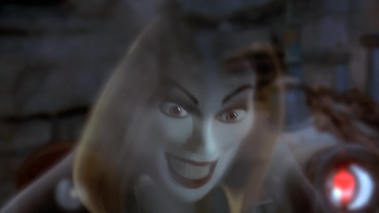 Back with an undead vengeance. 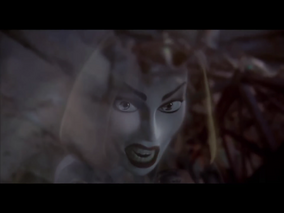 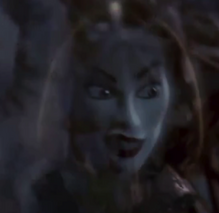 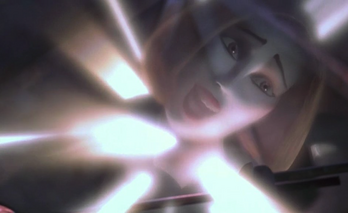 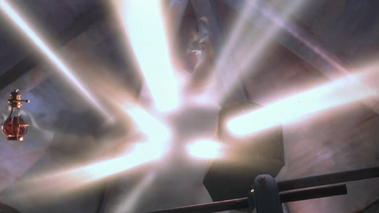 Add a photo to this gallery
Retrieved from "https://femalevillains.fandom.com/wiki/Carrigan_Crittenden_(Casper)?oldid=185215"
Community content is available under CC-BY-SA unless otherwise noted.