Start a Wiki
watch 04:10
The Loop (TV)
Do you like this video?
Carolyn Turner (Alison Wandzura) is the main villainess from the 2018 Hallmark film, Garage Sale Mystery:  Murder in D Minor, the 15th film from the Garage Sale Mystery series (airdate August 26, 2018).

Carolyn Turner is the granddaughter of Karl Dietz, who died of an apparent heart ailment in the beginning of the film. She was first shown demanding her inheritance, while also appearing to be genial to Jennifer Shannon regarding her request to by back an antique piano, doing so following her piano performance. It was revealed that Carolyn's inheritance was a collection of valuable paintings taken from Austria, with Dietz using his position with NATO to steal the artwork. Regarding Dietz's death, the pulmonary embolism that killed him was later revealed to have been intentionally caused, meaning that Dietz was murdered.

As for Carolyn, not only did she know about her grandfather's crimes and that her inheritance was ill-gotten, but she was the one who killed Dietz to get what she felt was hers. As Carolyn herself informed Jennifer, there was a rift between Dietz and his daughter (Carolyn's mother) Helga, but she was led to believe that the rift was healed and that Carolyn was back in the will. However, that was not the case, as not only was the rift ongoing, but Dietz was planning to sell his estate to charity, which would leave Carolyn with nothing.

After her mother passed, as well as learning about Dietz's plans, Carolyn turned heel and resorted to murderous means to gain her inheritance. Dietz was Carolyn's first victim, as Carolyn entered his home late at night and punctured his ventricular assist device, and later injected a chemical that killed Dietz. The villainess broke into the recital hall in an attempt to search for the paintings, and upon seeing Dean Connick, she attacked him and left him for dead (Dean survived). When she learned that a man named Sikes had a letter from Helga that outed her father as a criminal and revealed her plans to return the art, the evil Carolyn killed Sikes to keep the secret hidden, doing so by shooting him to death.

The code to the artwork was in a musical sheet of a classical piece by Mozart, and the film's climax saw Jennifer return with Jacques--an international agent who had been on the Dietz art theft case for years--to the hall. The duo found the art, as well as the original sheet, which led Jennifer to conclude that Carolyn had to have known. Her deduction was correct, as Carolyn appeared and pointed a gun at the pair, revealing herself as the villainess. Jennifer revealed Carolyn's entire scheme; all the while, the villainess voiced her lack of care that Dietz gained the paintings illegally, and even chastised her late mother's sense of morality. Jacques questioned Carolyn's morality, with the distraction allowing Jennifer to lower one of the sandbags and knock out Carolyn. After police arrived, Carolyn was arrested (off-screen) for the murders and the attempt on Dean. 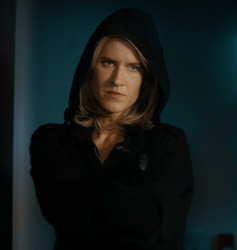 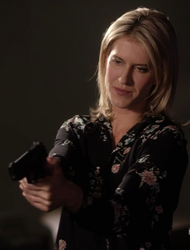 Carolyn's villainous reveal
Add a photo to this gallery
Retrieved from "https://femalevillains.fandom.com/wiki/Carolyn_Turner_(Garage_Sale_Mystery)?oldid=140289"
Community content is available under CC-BY-SA unless otherwise noted.