Start a Wiki
watch 01:51
The Loop (TV)
Do you like this video?
Caroline (Kasia Smutniak) was the hidden villainess from the 2010 action film, From Paris With Love. She was the French girlfriend of main protagonist James Reese, a personal aide to the American ambassador in France.

However, Caroline turned heel when she was revealed as a sleeper agent for a group of Pakistani terrorists. As part of her duties, the evil Caroline planted a bug inside a ring and gave it to Reese, so the group could track him. Caroline's villainous reveal came when she was exposed by Reese's partner, Charlie Wax, who gave Reese his gun to point at her. Caroline backed away in fear, only to grab her own gun and shoot Reese on the shoulder. After a gun battle with Wax, the villainess escaped out the window.

Knowing that the terrorists planned to bomb a U.S. Embassy, Reese searched for Caroline, who was donning an orange burkha. There were many women in burkhas, but Caroline was easily spotted thanks to her orange high heels. At that moment, Caroline removed her burhka and revealed herself to be wearing a vest covered with explosives. Reese attempted to talk Caroline out of committing her evil deed, only for her to attempt to detonate her bomb anyway, after saying that she is at peace. Reese stopped Caroline by firing a single shot to her head, killing her.

Caroline revealing herself as a terrorist

A close up of Caroline's high heels; which gave her away in her disguise 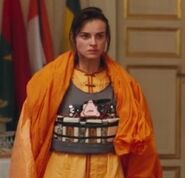 Caroline donning a burkha and an explosive vest
Add a photo to this gallery
Retrieved from "https://femalevillains.fandom.com/wiki/Caroline_(From_Paris_With_Love)?oldid=158037"
Community content is available under CC-BY-SA unless otherwise noted.