Carol (キャロル) and Brenda (ブレンダ) are female enemies from the arcade beat 'em up video game Captain Commando (キャプテンコマンドー) published in 1991 by Capcom. They serve as low level henchwomen for the games's main antagonist, Scumocide.

They appear to have a toned, athletic physique with particularly muscled upper arms. Their revealing one piece lingerie style outfit appears to be a made of shiny rubber/latex with thigh high boots attached to the rest of the outfit with garters. The characters are pallette swaps, identical in appearance except for hair and costume colour - Carol has pink hair and a purple colored outfit while Brenda has golden blonde hair and wears a green outfit.

The women both fight using dual handed electrified tongs that can deliver an electrocuting attack. There are slight differences to their attacks with Carol lunging forward with her tongs while Brenda is able to electrify the ground in front of her. Their fighting is focused on leaping evasions followed by striking from distance with their shock weapon, they are most effective as part of a group leaving their male counterparts to do the close up fighting while they lunge in on the distracted hero.

In the unfinished promotional comic for Captain Commando, we see Carol killing a male civilian hostage by embracing him while electrocuting him with her tongs, she seems unaffected by the electricity herself. However in the gameplay we see that Captain Commando is able to electrocute the villainesses using his own shock weapon.

Carol is the slightly more common enemy of the two, the game's manual says that Brenda is Carol's superior officer. In retro gaming pop culture, Carol seems to be the more well known.

Gameplay mockup animation of Carol and Brenda in action 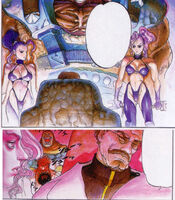 Add a photo to this gallery
Retrieved from "https://femalevillains.fandom.com/wiki/Carol_and_Brenda_(Captain_Commando)?oldid=178755"
Community content is available under CC-BY-SA unless otherwise noted.