Start a Wiki
watch 01:48
The Loop (TV)
Do you like this video?
Carol Hall (Natasha Henstridge) was a recurring villainess from Season Three of The CW's Beauty and the Beast. She was the wife of Bob Hall, and the couple were introduced in episode 3.03, "Bob & Carol & Vincent & Cat," as Homeland Security agents.

The couple was brought in on the investigation of the murder of Jack Thomas, another Homeland Security agent, taking over from Catherine Chandler and Tess Vargas. After catching Cat and Vincent Keller investigating on their own, the two pairs decided to work together, doing so after Vincent revealed that there was an attempt to kill Cat. Carol and Cat went on an undercover mission at the building owned by drug lord Julio Espinosa, under the suspicion that he was the killer; all the while, Carol was left impressed with how Cat fought off the security guards.

The evidence they uncovered was destroyed by the same sniper behind Thomas' death and Cat's attempt, and after this, Vincent and Cat decided to let the Halls in on the revelation that innocents are being turned into superhumans in a sinister experiment. Later on, though, Cat and Vincent later learn that DHS had no record of a Bob and Carol Hall, and it was eventually revealed that they were superhumans who killed Thomas. They had the ability to slow down their brains' process, allowing them to see things in slow motion. This was used in Thomas' murder, as Carol fired the shot, and Bob fired a second shot that diverted Carol's bullet towards Thomas.

The couple's official reveal came when they planted a bomb on Vincent's houseboat, and they later visited the couple and continued their ruse. Once the protagonists revealed their knowledge of the Halls' true actions, the couples fought each other, which included Vincent revealing his beastly form and fighting off Bob. The Halls left the boat in a rush due to the bomb about to go off, with Cat and Vincent escaping the attempt.

Two episodes later in "The Most Dangerous Beast," Carol and Bob began their plan to lure Cat away from Vincent, which included the villainess killing an innocent man to bring Cat to the case. It was in this episode that their motive was revealed; they wanted to see if Vincent truly was the beast they heard about, and intended to use him to cure them. While Bob was stalking Vincent, the evil Carol engaged in an encounter with Cat in the episode's climax, with the battle taking place at an abandoned warehouse.

Carol taunted Cat and boasted over the fact that her powers allowed her to see Cat's every move. Despite Cat disarming Carol, she was on the receiving end of a one-sided battle, but knowing that Carol's powers only work in the light, Cat retrieved the gun and fired at the lights. With Carol unable to sense Cat's moves in the darkness, Cat easily subdued and arrested Carol.

Cat's attempt to get Carol to reveal who she and Bob work for fails, as she only revealed her and Bob's plans to capture Vincent. After Bob ran down Vincent's friend, JT Forbes (who survived), Vincent--in his beastly form--killed Bob and later informed the news to Tess. Tess and Cat were trying to figure out how to tell Carol, only to Carol to realize that Bob had been killed just by looking at them. At that moment, the villainess intentionally used her powers to stop her heart, committing suicide out of heartbreak. 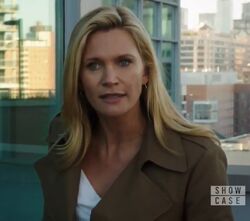 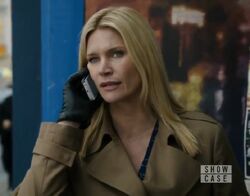 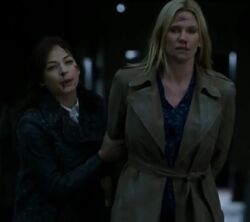 Carol defeated and arrested by Cat

Carol Hall following her suicide
Add a photo to this gallery
Retrieved from "https://femalevillains.fandom.com/wiki/Carol_Hall_(Beauty_and_the_Beast)?oldid=191300"
Community content is available under CC-BY-SA unless otherwise noted.