Start a Wiki
watch 04:10
The Loop (TV)
Do you like this video?
Carmella is a professional wrestler currently competing in WWE, where she portrays a villainess.

Carmella was signed by WWE in 2013 and made her in-ring debut at a house show on June 6, 2014. Dubbing herself as "The Princess of Staten Island," Carmella debuted as a villainess and competed in two matches against Devin Taylor; winning the first and losing the second.

Carmella made her televised debut on NXT as a hairdresser in a segment with Enzo Amore and Colin "Big Cass" Cassaday, with their antics getting Carmella fired. Carmella returned on September 18 and asked Enzo and Big Cass to help her become a professional wrestler, with various segments being aired in the following weeks showing the duo training her. Carmella's televised in-ring debut came on October 16, when she defeated Blue Pants via submission. Despite her alliance with babyfaces Enzo and Big Cass, Carmella continued serving as a heel and racked up victories over Emma and Blue Pants, before losing to the latter on January 1, 2015. In the coming months, Carmella slowly became a babyface due to her alignment with Enzo and Cass, and it was solidified during their feud with reigning NXT Tag Team Champions Blake and Murphy, along with the villainous Alexa Bliss.

Carmella was drafted to the SmackDown roster on July 19, 2016. On the August 23 edition of SmackDown, Carmella attacked the returning Nikki Bella, interrupting Nikki's interview with Renee Young and cancelling a singles match between the two. The attack was part of a double turn, with Carmella turning heel for the first time on the main roster. On Talking Smack (SmackDown's post-show) later that evening, the evil Carmella again attacked Nikki from behind, cementing herself as a villainess and beginning a feud between the two. Both women were part of a six-pack elimination match to crown the first ever SmackDown Women's Champion at Backlash, and at the event, Carmella eliminated Nikki before she was eliminated herself by the winner, Becky Lynch. At No Mercy, Carmella was defeated by Nikki in singles action.

Carmella faced Nikki once again at TLC, due to Nikki accusing Carmella of attacking her at Survivor Series. After again losing to Nikki, Carmella revealed that Natalya attacked her at the event, and on the December 20 SmackDown, Carmella interrupted a segment between Natalya and Nikki and revealed verbal proof of her claim, which ended up with Natalya attacking Carmella and then later admitting to attacking Nikki at Survivor Series. It was on that same night that Carmella began her relationship with James Ellsworth, and months later, the two of them aligned with Natalya and Tamina to form "The Welcoming Committee," after Charlotte moved to SmackDown as part of the Superstar Shake-Up.

Carmella made history at the Money In The Bank PPV, as she won the first ever Women's MITB Ladder Match in June 2017. However, the win came due to Ellsworth climbing the ladder and grabbing the briefcase to give to Carmella, which forced General Manager Daniel Bryan to vacate the briefcase and set a rematch on SmackDown, which Carmella again won. After ten months, Carmella cashed in the briefcase on Charlotte during the post-WrestleMania edition of SmackDown (after Charlotte was attacked by the debuting Billie Kay and Peyton Royce) and successfully captured the SmackDown Women's Championship. Carmella successfully defended the title in a rematch at Backlash on May 6, 2018. 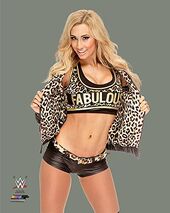 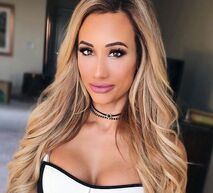 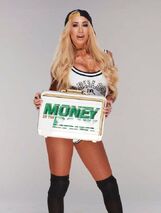 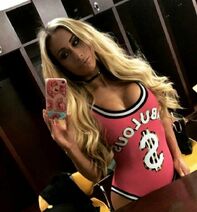 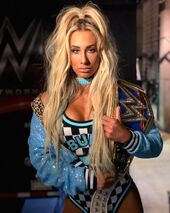 Add a photo to this gallery
Retrieved from "https://femalevillains.fandom.com/wiki/Carmella_(WWE)?oldid=123484"
Community content is available under CC-BY-SA unless otherwise noted.