Start a Wiki
watch 01:48
The Loop (TV)
Do you like this video?
Carly Meadows (Elisa King) is an antagonist in the 2007 episode "Fierce" for the TV series "Smallville".

Carly Meadows was one of the members of the Weather Girls along with Tyler Crenshaw (Eva Marcille) and Tempest Drake (Christine Chatelain).  Their powers were different, Carly could control heat and fire, Tyler could create ice and manipulate it, and Tempest could control wind.

When the girls came to Smallville, they were after a treasure map that was believed to be hidden in a time capsule.  It supposedly led to millions of dollars in gold bars. They entered the "Miss Sweet Corn" beauty pageant to disguise their motives for being present in Smallville and to misdirect the authorities. Carly was planning on stealing the money before the other girls could get to it. She walked into a flower shop, but the room froze in seconds, killing her.

At the Talon, Tyler revealed to Tempest that she took care of Carly. Kara Kent (Laura Vandervoort) asked them for help with her makeup, but they ignored her and made rude comments. Kara left and walked past the frozen flower shop, finding Carly dead. 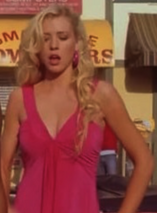 Add a photo to this gallery
Retrieved from "https://femalevillains.fandom.com/wiki/Carly_Meadows_(Smallville)?oldid=134872"
Community content is available under CC-BY-SA unless otherwise noted.