Carleigh Taylor (Katie Gill) is the main villainess of the 2011 Lifetime film Betrayed at 17.

Carleigh was a spoiled teenager girl who is used to having everything her way. She was the ex girlfriend of Greg Nickels, and she did not take getting dumped by him well. She also bullies Lexi Ross, a shy girl at her school, as evidenced in her first scene where she insults Lexi's weight.

When Carleigh finds out that Greg made a bet with his friend Jared that he could have sex with Lexi, she becomes angry and decides to retaliate. She steals Greg's phone while he's in the school locker room and sends a video he made of his and Lexi's tryst and forwards it to several people, making the video go viral. Later that night, at a party she holds, Carleigh makes a derogatory sexual remark to Lexi when she gets a hot dog from the barbecue. Lexi is humiliated and heartbroken when she learns about the video and Greg's bet and runs off. Carleigh is pleased at Lexi's embarrassment, but is shocked when she witnesses Lexi run into the road and get fatally struck by a car.

Greg is brought into the principal's office about the video and he denies sending it around, certain that Carleigh did it. Carleigh is also questioned with her father, who says that Greg is simply using his daughter as a scapegoat. Greg is suspended and he immediately confronts Carleigh, who is with Jared, her new boyfriend. When Carleigh denies her actions, Greg tries to attack her, but is restrained and forced to leave. He is later attacked by Lexi's vengeful brother Shane and arrested for having sex with a minor.

After being released, Greg parks outside Carleigh's house and she gets in to talk to him. Greg eventually gets Carleigh to confess what she did, citing that she didn't do it to hurt Lexi, but to get back at Greg for breaking her heart and to show everyone who he really was. Greg then reveals he had recorded Carleigh's confession on his recorder before forcing her out of his car. Panicked, Carleigh runs back inside, gets her father's gun, and goes after Greg. She catches Greg outside his house and forces her way in. Carleigh then points the gun at Greg and demands him to give her his recorder. Greg refuses and tries to grab the gun, but it goes off and kills Greg. Panicked, Carleigh takes Greg's recorder and and makes a run for it, wiping her fingerprints off the door as she does. Later, she smashes the recorder and plants Greg's wallet in a toolbox behind the Ross household, framing Shane for Greg's murder.

Shane and Lexi's mother Michelle works with Greg's mother Brenda to prove Shane's innocence, eventually finding security footage from the school that proves Carleigh sent out the video of Lexi and Greg. After finding out about the security cameras at the school, Carleigh becomes scared and confesses her actions to her father. He decides they need to get rid of the gun and head out to do so when they are stopped by Michelle and Brenda. Desperate, Carleigh grabs the gun from the car and points it at the two women, saying she won't let them ruin her life. After some talk, Carleigh surrenders, but not before shooting herself in the leg in a moment of dismay. She is then arrested for murdering Greg and sending out the video of Lexi.

Carleigh with Jared at her party

Carleigh at Lexi Ross's memorial board 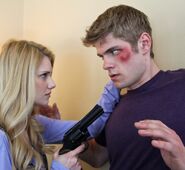 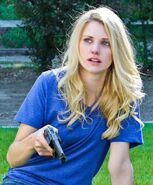 Carleigh surrenders
Add a photo to this gallery
Retrieved from "https://femalevillains.fandom.com/wiki/Carleigh_Taylor_(Betrayed_at_17)?oldid=210056"
Community content is available under CC-BY-SA unless otherwise noted.