Start a Wiki
watch 01:39
The Loop (TV)
Do you like this video?
Carla Petro, aka Amanda or Tasha (Rachel York), is a villainess from "Rekt in Real Life," episode 5.14 of Elementary (airdate February 19, 2017). She is an escort who was running her own agency, which had Libena (Tendu's girlfriend) as one of her workers.

It was from Carla's agency that Joey Ng acquired the escorts to keep players on his gaming team, with Libena being assigned to Tendu, leading to a relationship. It was revealed by Joey that Carla's agency kept the girls working by taking their passports and 90% of their money, leading to Tendu approaching Joey to help him buy Libena's freedom. Tendu was also working on exposing all Carla's bosses, and to cover her own tracks, the evil Carla burned down her office, using gas from an old Ford Mustang and a cigarette to set the fire.

Everything was revealed during Carla's interrogation by Captain Gregson and Detective Marcus Bell, but Carla also revealed that Tendu offered her a deal, which she accepted, while also releasing Libena so she could continue her relationship with Tendu. She also revealed she was paid $100,000 on the spot by Tendu, and after the interrogation ended, it was stated that fire marshals would question her, giving the indication that Carla was arrested (off-screen) for the arson and other crimes. 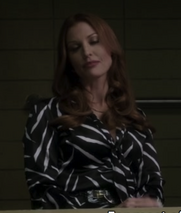 Add a photo to this gallery
Retrieved from "https://femalevillains.fandom.com/wiki/Carla_Petro_(Elementary)?oldid=188065"
Community content is available under CC-BY-SA unless otherwise noted.