Start a Wiki
watch 01:50
The Loop (TV)
Do you like this video?
Carla Lynde (Ingrid Pitt) is a vampire in "The Cloak" segment of the 1971 horror film "The House That Dripped Blood".

Carla was a co-star of Paul Henderson, in a vampire horror film set.

Paul decides to go shopping for a more realistic wardrobe than the cheap materials provided him by the set of the studio.  In an antique costume shop he finds the perfect cloak.  The problem is that the cloak does strange things when Paul puts it on.  For example, he can't see himself in a mirror.  Second, he has a strange cumpulsion to bite Carla in the neck.  The last problem is that he has grown fangs and he can't seem to keep his feet on the ground.  Paul had determined that when he wears the cloack at midnight, he has turned into a real life vampire.

When Paul tries to explain the cloak to Carla, she taunts him into wearing it in front of her in order to prove that there's nothing wrong with it.  When the clock strikes midnight, Just as Carla predicted, nothing happens.  However, Paul notices that he's only wearing the studio cape.  Carla pulls out the real cape, drapes it around her shoulders, bares her own fangs, and goes after Paul.  Her comment is that the other vampires were so impressed with his work that they wanted him to be one of them. 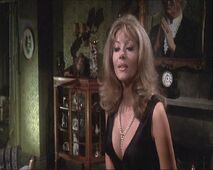 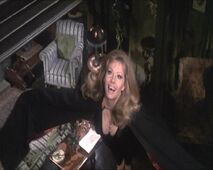 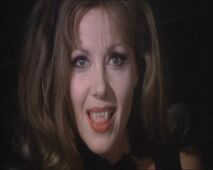 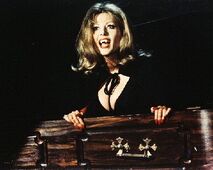 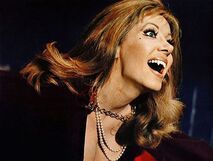 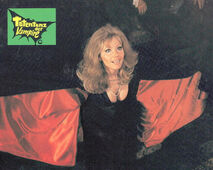 Add a photo to this gallery
Retrieved from "https://femalevillains.fandom.com/wiki/Carla_Lynde_(The_House_That_Dripped_Blood)?oldid=98279"
Community content is available under CC-BY-SA unless otherwise noted.