The Female Villains Wiki
Register
Don't have an account?
Sign In
in: 1980s, Arms Dealer, Bare-Handed,
and 26 more

Villainess Carla Hastings is a henchwoman who appears in the movie Cyclone  (USA 1987). She was played by actress Ashley Ferrare (b c 1959).

Teri Marshall (Heather Thomas) has a scientist boyfriend who has developed a rocket and laser firing motor bike, the "Cyclone". The bike and its revolutionary "transformer" - which can provide an inexhaustible supply of power - making all other fuel sources unnecessary - are wanted by a gang of vicious criminals. The gangsters murder Teri's boyfriend at a night club. It's now

To steal the Cyclone bike. To kill Teri, the heroine.

Beaten up and defeated in a fight with Teri, the heroine.

up to grief stricken Teri to protect the bike, and specifically the transformer, from the criminals - but she's beset by murder and treachery on all sides. Eventually, in alliance with a policewoman, Teri saves the inventions from the criminal's clutches, the villains being defeated in an explosive action showdown on the streets of Hollywood (though Teri deliberately destroys the transformer herself at the end).

Carla is a white woman - tall, slim, beautiful and blonde, probably in her late 20s. Her hair is tied back and in a pony tail or braided throughout the film. Carla's features, especially in the latter part of the film where her villainy has been revealed, are a fascinating example of a woman who is very beautiful looking very evil at the same time.

During much of the film Carla is ostensibly the friend of the heroine, Teri. However, in a surprise development, when Teri has been captured by the criminals, Carla herself is revealed to be one of them, merely masquerading as a "best friend" to the heroine for evil ends. As well as being a treacherous murderess, Carla shows herself to be viciously sadistic. In a fit of bad tempered vindictiveness after a tied up Teri insults her, Carla slaps her hard; soon after she throws hot coffee into the helpless heroine's face ( she gloatingly crows over Teri's painful ordeals). Carla is preparing to torture Teri with electricity to try again to get her to reveal the whereabouts of the transformer (or possibly to torture her to death), when the policewoman bursts in and frees the heroine. Carla's viciousness towards Teri has been shown to be driven by a venomous very personal hatred for the brave, defiant, and maddeningly uncooperative heroine, as much as by her a desire to get hold of the Cyclone transformer. Carla is a really nasty, incorrigible villainess -  a treacherous dissembler, callous, viciously cruel, ruthless - and so it's fitting indeed that Teri finally pays her back in the way she does.

At the climax of the film, the criminal gang pursue Teri, who is escaping on the Cyclone. The villains use 2 cars, with Carla on a motorbike. Teri fires rockets  from the Cyclone destroy a pursuing car - another burst sends Carla and her bike hurtling explosively over a car, the villainess is sent flying thru the air and crashing to earth. Teri, after finishing off a surviving henchman with a Cyclone rocket, walks over to Carla's body - but  the villainess, miraculously, seems to have survived completely uninjured, she's only playing dead/unconscious. As Teri leans over her, Carla lashes out, knocking her over. Carla then tries to flee; Teri, having soon recovered herself, stops Carla's attempted escape. There follows a notably rough female fight between the 2 enemies. Carla gets in some lucky blows and typically fights dirty, kicking Teri while she's on the ground - but it's Teri who dominates her evil opponent (though we've seen in an early scene in a gym that Carla is very strong, stronger than Teri). Teri delivers some remarkably tough punishment to Carla (Teri is avenging her boyfriend's murder, which Carla set up - and the scalding/torture Carla and her gang inflicted on her). The vicious villainess is yanked about like a rag doll while Teri's fists smash her in the face again and again, turning it into a bloody mess (while Carla squawks and bleats with pain and terror), until finally the heroine allows her now unrecognizable opponent to collapse insensible onto the ground.

The cat-fight between Teri and Carla eschews fancy martial arts for a good old fashioned slug and kick fest. There don't seem to have been any stunt doubles used. Rather than some predictable straightforward KO, director Fred Olen Ray has Teri give Carla the sort of spectacular, relentless, and bloody beating it's rare indeed to see any villainess, however deserving of it, being handed in a western movie production.

Sadly, Cyclone seems to have been Ashley Ferrare's final celluloid appearance to date - subsequently she has disappeared from view. 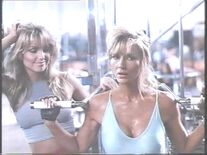 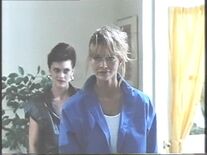 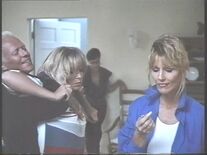 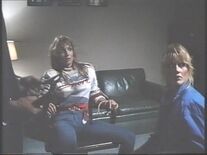 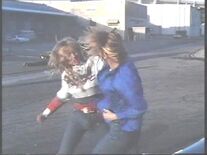 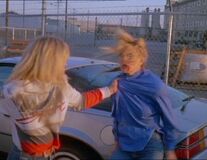 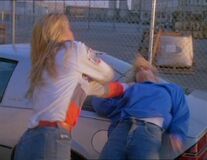 Carla feels the impact of those punches... 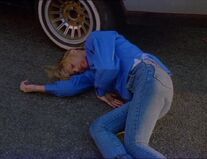 Carla is out cold...