Marla, Carla and Darla are sexy models and villianesses. They are the accomplices of Nick Holiday, the main villain. 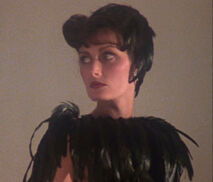 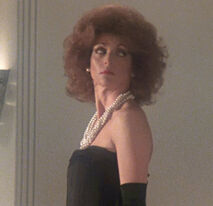 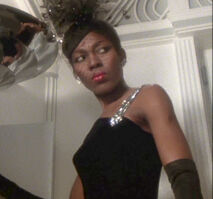 Darla
Add a photo to this gallery

In the movie, they frame miss piggy, resulting in her being arrested and sent to prison. With Miss Piggy out of the way they move forward with their plans to steal a valuable diamond.

The other Muppets set off to prove Miss Piggy's innocence and bring them to justice.

In the climax of the movie, Holiday and his vilianesses have just got the diamond when they are surprised by the Muppets. Whilst Animal keeps the ladies distracted by scaring and chasing them, the other Muppets play a game of baseball with the diamond. This comes to an end when Nicky captures Kermit and the diamond and holds him at gun point. Feeling like the tables have turned in their favour the ladies relax as they now have the upper hand. Nicky calls them over in order to make their escape.

Unfortunately for the villianesses Miss Piggy makes a dramatic entrance crashing through a stain glass window on a motorbike. The ladies have a look of shock on their faces and raise their arms in surprise as Miss Piggy dives towards Nicky knocking him unconscious to a cheer from the Muppets.

Angry that Nicky has been defeated by a mere pig the arrogant villianesses confront Miss Piggy to fight her. Carla lunges forward to strike Miss Piggy with her right hand, but is kicked to the body before she can land it, causing her to fall unconscious to the ground. Marla appears shocked at what she just witnessed and whilst she is distracted looking at the now unconscious Carla, Miss Piggy strikes Darla, then Marla to the body causing them to wince in pain. Marla is then quickly despatched with another strike to her body and collapses to the ground unconscious. As Missy Piggy strikes Darla to the body again, Darla is able to hit Miss Piggy to her head, turn her around and grab her hair. Miss Piggy reacts by stamping on Darla's foot and as Darla goes for a big right hand slap, Miss Piggy elbows her to the body causing her to fall to the ground unconscious.

With all villianesses now defeated Animal ensures they are subdued by sitting on top of them and mocking them with laughter.

Nicky begins to regain consciousness and reaches for his gun, but Kermit quickly knocks him unconscious with the diamond. The Police arrive and they are all arrested.

Marla put in the police car

Bad girls in the (manor) house

Carla admires the diamond, unaware that the Muppets are about to scupper her plan

Carla, Marla and Darla are sexy women in their early 30s. They are seen during the film wearing a variety fashionable clothes as part of their day jobs of being models.

In the climactic scene, all the villianesses done tight black catsuits and leather gloves.

Retrieved from "https://femalevillains.fandom.com/wiki/Carla,_Marla_and_Darla_(The_Great_Muppet_Caper)?oldid=186902"
Community content is available under CC-BY-SA unless otherwise noted.