Start a Wiki
watch 01:51
The Loop (TV)
Do you like this video?
Captain Ladee (Jessica St. Clair) was the hidden main villainess from the second season of Ryan Hansen Solves Crimes on Television (airdate January 30, 2019).

Captain Ladee first appeared in the season opener, "Revival," replacing Captain Jackson as the new police captain in charge of the celebrity task force. She introduced herself to Ryan Hansen after his partner, Detective Jessica Mathers, was shot and ended up in a coma, and it was shortly afterwards that Ladee paired Ryan with a new partner, Vince Vincente.

Ryan mainly focused on looking for Mathers' shooter, and he began to suspect Vince when video of him at the scene appeared on his phone. The end of episode #4, "I'm Sorry, She Classpassed," had Vince revealing that he was with Internal Affairs, and the following episode, "The Ry Chromsome," revealed that Vince was investigating LAPD Red, a villainous faction of corrupt cops who commit (among other things) murder-for-hire killings. It was believed that Mathers was shot because she was possibly getting close to the truth, but the season's penultimate episode, "The Ry Guy Goes to Jail," revealed that Ryan was the actual target.

The season finale, "Execution Dependent," had Ryan and Vince investigating who would want the former shot, with the pair interviewing celebs Dax Shepard, Donald Faison, and Ben Schwartz, all of whom were cleared as suspects despite their shared history with Ryan. Later on, Ryan received a phone call from a mysterious person in a parking garage, who claimed to have information regarding who shot Mathers and arranged a meeting. Ryan and Vince appeared at a parking garage waiting for the informant, who was revealed as Ladee, much to Ryan's surprise. Her attempts to reveal Mathers' shooter were interrupted on more than one occasion by a man getting stuff out of the back of his car--a Hatchback--with Ladee shouting at him to leave so she can give the information.

At that moment, Ladee turned heel and revealed that she shot Mathers, and later pointed a gun at Ryan and Vince to cement her reveal as a villainess. As it turned out, Ladee was the ringleader of LAPD Red, and she shot Mathers to cover up for her corruption. In a bigger twist, however, the evil Ladee also revealed that she was attempting to kill Ryan, due to her hatred of his YouTube show and her desire for it to be canceled permanently. The villainess even callously stated that the show was the worse representation of the LAPD, even worse than her crimes and the department's real life criminal actions (even the Rodney King incident). Ryan began performing his training for the Black Panther reboot, which angered Ladee, but it was a distraction for him to kick the gun from Ladee's possession, with the gun going off and striking Vince's shoulder.

Ladee escaped, leading to the duo chasing her all the way to Chinatown, where the villainous police captain found them and held them at gunpoint. Ladee continued voicing her hatred of the show and was set on killing Ryan and Vince, only to end up shot to death by Mathers, who woke up from her coma. 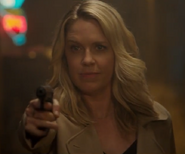 Ladee's deceased body
Add a photo to this gallery
Retrieved from "https://femalevillains.fandom.com/wiki/Captain_Ladee_(Ryan_Hansen_Solves_Crimes_on_Television)?oldid=142106"
Community content is available under CC-BY-SA unless otherwise noted.