Start a Wiki
watch 01:51
The Loop (TV)
Do you like this video?
Captain Kuroiga (Hikaru Kuroki) is a secondary antagonist in the 1969 Japanese sci-fi film "Latitude Zero".

Captain Kuroiga is a henchwoman for Dr. Melic (Cesar Romero), a scientist of Blood Rock.  She serves as the Captain of the submarine Black Shark.  In the film, she attacks the submarine Alpha, captained by Craig Mackenzie (Joseph Cotten).  Mackenzie is over 200 years old, and lives at Latitude Zero, a paradise hidden fifteen miles below the surface at the intersection of the Equator and the International Date Line.  No one ages or dies at Latitude Zero, and Gold and Diamonds are common. Dr. Malic wishes to destroy the paradise, and uses giant rats and anthropormorphic bats in addition to James Bond-style devices against the undersea kingdom.

Captain Kuraoiga loves her boss Melic.  However, she is ultimately betrayed when he kills her for punishment for not catching the submarine Alpha.  He accomplishes this along with the help of his other mistress, Lucretia (Patricia Medina).  Dr. Malic then grafts the wings of an eagle to a lion, and uses her brain for a transplantation surgery of the same lion.  This proves to be his undoing when, at a critical moment, Kuroi turns against Malic as he prepares to fire an energy cannon at the escaping visitors, causing their destruction.  Her brain is crushed and buried in its own self-caused rockslide. 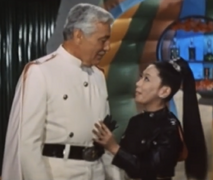 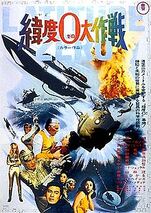 Add a photo to this gallery
Retrieved from "https://femalevillains.fandom.com/wiki/Captain_Kuroiga_(Latitude_Zero)?oldid=196090"
Community content is available under CC-BY-SA unless otherwise noted.