Start a Wiki
watch 00:17
The Loop (TV)
Do you like this video?
Candice Davick (Mandy June Turpin) is a villainess from the 2017 Lifetime film, Double Mommy (airdate March 18, 2017). She is the wife of pharmaceutical company CEO Scott Davick, and the mother of Brent Davick (the film's main antagonist).

In the film, Brent drugs and rapes Jessica Bell (the main protagonist) after he drives her out of a party, and in the early scenes, Candice is shown walking into her son's room, where he is knocked out and asleep. She notices the bottle of pills (which Brent used on Jess) and shakes her head as she picked them up, but as revealed later on, Candice took the bottle to cover for Brent, as the film's progression revealed that Brent is a serial rapist. Also, as a result of Brent's rape, Jess became pregnant with two children--one belonging to Brent and one belonging to her boyfriend, Ryan.

Candice was shown standing firm with Scott as they attempted to pay off the Bells for their silence, while Brent was attempting to drug Jess in order to cause a miscarriage, which failed. After Brent's application to Wittendale was put on hold, Scott lashed out at Brent and informed him that he wouldn't bail him out anymore, and it was at this moment that Candice revealed herself as a villainess willing to cover for her son's actions. She showed Brent the pill bottle that she took from him earlier in the film, and she later tossed the drugs into the sink, while telling Brent that she was looking out for him as well. Video evidence of Brent's actions resulted in him being arrested for sexual assault and facing up to eight years in prison, and after this, Scott ended up ousted from his company, leading to him kicking Brent out of the house. Candice spotted Brent taking possession of Scott's gun and planning to kill Jess, and she later called Scott and told him about their twisted son's plan. The confrontation between Brent and Scott ended with the latter being shot and killed by the former during a struggle with the gun.

Two months later, in the film's final scenes, Jess had given birth to the twins: Charlotte (Ryan's daughter) and Charlie (Brent's son). Later on, Candice appeared at the door and asked Tricia (Jess' mother) if she could see Charlie, stating that with Scott dead and Brent likely spending the rest of his life in jail, her grandson is all she has left. Tricia originally denied Candice's request, but eventually invited her in to see Charlie. Candice picked up Charlie just as Tricia went to get a bottle, but at that moment, Candice unleashed her heel persona by stating to her grandson that he is a Davick, and that alone made him special. In addition, the evil Candice informed her infant grandson to do what she tells him, and that one day, he would make her proud, indicating that Candice would raise and control Charlie just as she and Scott did with Brent. 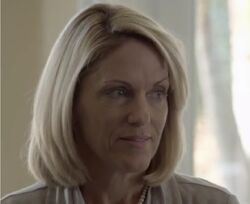 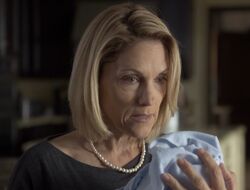 Candice's heel persona during the final scenes
Add a photo to this gallery
Retrieved from "https://femalevillains.fandom.com/wiki/Candice_Davick_(Double_Mommy)?oldid=212669"
Community content is available under CC-BY-SA unless otherwise noted.