She is a 24 year old woman who is involved with a criminal smuggling ring, using her job as a flight attendant to help smuggle priceless artifacts. She is also a document forger.

Cammy appears to be an extremely lazy woman at first glance, often falling asleep while being talked to and even nodding off while standing. She also constantly carries a doll of her airline's mascot around with her. However, this is all an act to make herself seem harmless, as Cammy is in truth a cunning individual.

During one flight, she was ordered to help Interpol agent Akbey Hicks in an investigation of the plane's cargo hold. When Hicks began to take pictures of the cargo hold, Cammy panicked and pushed him off the elevated staircase to the floor far below, killing him. She proceeded to cover her tracks and pin the blame on Rhoda Teneiro, a fellow flight attendant. She did this mainly by planting Hicks' cellphone in Rhoda's locker and by using one of the suitcases that Rhoda had designed to transport the body.

Unfortunately for her, whilst in the elevator, the plane underwent a period of high turbulence, and the suitcase burst open. The corpse fell out and his belongings were spread all over the elevator. Cammy decided to make the elevator seem like the crime scene. She left the corpse as it was, cleaned out the suitcase, placed it in the gift shop and used a piggy bank from the gift shop cabinet to fabricate a murder weapon by smearing it in blood. She then planted Hicks' travel wallet on Miles Edgeworth, who had the misfortune to have been rendered unconscious by the turbulence in the lounge.

Edgeworth got involved in the murder investigation after Rhoda obtained permission for him to do so. However, when Cammy found out that Rhoda had lied about obtaining said permission, she injected herself into the investigation. Cammy told Edgeworth that she had seen Hicks at 5 a.m. and spent most of her time with Edgeworth, trying subtly to steer the suspicion onto Rhoda. Eventually, however, Edgeworth figured out that Cammy was responsible not only for killing Hicks, but also for aiding the smuggling ring, the evil Cammy Meele was then promptly arrested. 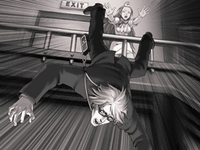 Pushing Agent Akbey Hicks to his death
Add a photo to this gallery
Retrieved from "https://femalevillains.fandom.com/wiki/Cammy_Meele_(Ace_Attorney)?oldid=64624"
Community content is available under CC-BY-SA unless otherwise noted.