Start a Wiki
watch 01:50
The Loop (TV)
Do you like this video?
Cameron is a professional wrestler best known for her time in WWE, where she portrayed a villainess.

Cameron is best known for being one half of The Funkadactyls with Naomi, but by the summer of 2014, Cameron began turning heel during matches against then-Divas Champion Paige. Cameron kept losing to Paige, but her partner, Naomi, defeated her on an edition of Main Event. After the match, Cameron attempted to attack Paige, only for Paige to fight back against her. At Money In The Bank, Cameron was at ringside during Naomi's title opportunity against Paige, and was shown smiling evilly when Naomi was in trouble.

On July 7, Cameron and Naomi were defeated by AJ Lee and Paige in tag team action. After the match, Cameron and Naomi fought each other and argued, officially disbanding the Funkadactyls and cementing Cameron as a villainess. Cameron was later defeated by Emma on Main Event, and attacked Emma before she was run out by Naomi. At Battleground's pre-show, the evil Cameron defeated Naomi in a grudge match.

After Battleground, however, Cameron continued antagonizing Naomi, beginning with attacking Naomi after her loss to Paige on SmackDown. Cameron gave an evil laugh at Naomi while claiming that she is not Naomi's shadow, but despite this, the ongoing feud always saw Cameron on the losing end against her former partner, even being eliminated by Naomi at Survivor Series. By 2015, Cameron's TV appearances became sporadic and she was sent back down to NXT, where she lost matches to Asuka and Alexa Bliss. 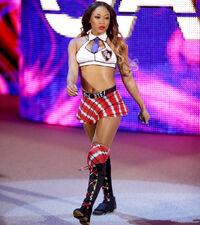 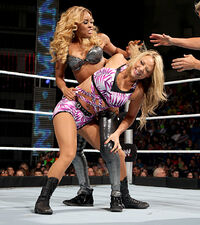 Cameron vs Emma on Main Event
Add a photo to this gallery
Retrieved from "https://femalevillains.fandom.com/wiki/Cameron_(WWE)?oldid=98714"
Community content is available under CC-BY-SA unless otherwise noted.