The Female Villains Wiki
Register
Don't have an account?
Sign In
in: 2000s, Boss, Brunette,
and 21 more

Callisto (Dania Ramirez) was a villainess from the 2006 film, X-Men: The Last Stand.

Callisto was the leader of a small band of outcast mutants, sometimes known as the Omega or indirectly called the Omega Gang. After a cure for mutants had been created, the Omega mutants have allied with the Brotherhood of Mutants led by Magneto. Callisto seemed an aversion Storm to cherish, because they had attacked the fighter of the X-Men again. She was eventually defeated by Ororo Munroe/Storm during the final battle on Alcatraz Island where she was thrown against an electrified fence and electrocuted to death.

Callisto's abilities included Factor Detection (being able to determine a mutant's presence and their strength) and superhuman speed. 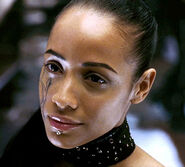 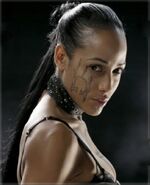 Callisto with Psylocke and Arclight.

Callisto in the middle of fighting of Storm.