Start a Wiki
watch 01:48
The Loop (TV)
Do you like this video?
Callie Chalmers (Charisma Carpenter) was the main villainess of the 2011 Lifetime film Deadly Sibling Rivalry (airdate August 15, 2011). She was the evil twin sister of main protagonist Janna Chalmers (also played by Carpenter in a dual role).

Growing up, Callie and Janna had a contentious rivalry, with the former expressing immense jealousy of the latter. As a teenager, Callie's resentment became pure hatred, and 20 years prior to the film's events, she attempted to murder Janna. While they were preparing to go rock climbing with their father Henry, the villainess slightly cut her sister's harness so that it would snap during the climb. However, it was their father who ended up using the sabotaged harness, and he plunged to his demise after said harness broke.

Callie callously blamed Janna for the murder (despite the former being the murderer herself), and since then, she lived a wild lifestyle and was unable to hold down a job. Her last job was as a nurse at a hospital, but she was fired after she stole prescription drugs—which she and her then-friend/partner-in-crime Tricia Staunton intended to sell on the black market.

Callie was on the run from the police at the beginning of the film, as she was shown packing her belongings and heading to Janna's house. Janna's daughter (and Callie's niece) Fiona took a shine to Callie, though the hostility between the sisters remained, as it was displayed while they were out with Tricia at a bar. On the following day, Callie and Janna were out driving together, with the former behind the wheel. The pair got into yet another argument, which led to a car accident. It was uncovered later on Callie appeared to tend to Janna's right leg by applying a tourniquet to stop the bleeding. However, the enraged woman instead unleashed her hatred towards her twin by revealing that she had intended to kill Janna on the day their father died, after which she removed the tourniquet and intentionally caused her sister to lose a lot of blood. While Janna became a hospitalized comatose woman as a result, Callie posed as her to not only evade the police, but to live her sister's life—which she felt should have been her own.

Callie was visited by Tricia at the Chalmers residence, with the latter demanding what she was owed and mistaking the former for Janna. It wasn't until Tricia's "second" encounter with Janna at the hospital she was laid up in that the former realized Callie was posing as Janna. This was followed by the greedy conspirator going from demanding the drugs to demanding cash from her, with the latter acquiescing and then meeting the former at her house to make the transaction. During an increasingly heated conversation between the two, Tricia insulted Callie several times, prompting her to attack her and lock her in her own freezer. She drowned out the pleas of her former friend and cohort to be freed by talking almost continuously as she sat on top of said freezer for several hours until she suffocated and froze to death. Callie then planted numerous alcohol bottles close to her victim's corpse, supposedly to make it look like Tricia was a drunk woman who accidentally trapped herself inside.

Meanwhile, Fiona began to realize that her aunt was pretending to be her mother—with the latter being the one in a coma. Janna's improvement was also complicating Callie's evil schemes, leading the villainess to sabotage her sister's IV with medication she had stolen. The tainted IV caused Janna to have a seizure, which led to doctors attempting to revive her with a shot of adrenalin. It worked, but the protagonist had amnesia as a result, which resulted in Fiona's attempts to tell Janna who she really is backfiring. Callie then revealed her true identity once she and Fiona returned to the Chalmers residence, with the former attempting to convince the latter that she (and not Janna) should be her mother. This immensely upset her, and she left with her boyfriend Kayden.

Now seeing her niece as an enemy and a threat, the evil Callie planted the drugs in Fiona's purse in an attempt to frame her. She called the police on the couple, and once they were stopped, Kayden took the fall so his girlfriend could get to Janna. After finding out that Fiona escaped with her mother, the jealous villainess followed them to their family's cabin—where Janna's memories were returning—and fired bullets at both of them. Callie's pursuit of her sister and her niece led to Fiona hanging off a cliff, and it was when Janna grabbed climbing gear that she saw the broken harness, causing her to remember that her twin killed Henry.

Callie then armed herself with a shotgun and fought her sister, with the altercation ending when Janna knocked the former out with the handle of an axe. While the protagonist climbed down the cliff to save her daughter, the psychotic woman resurfaced and attempted to cut the rope in order to murder both of them, but instead, she ended up falling over and grabbing onto her sister's harness. As Callie was hanging, Janna stated that she loved her despite everything that had occurred, only for the former to spitefully proclaim that it was exactly what she hated about the latter. Her final words proved to be her ultimate downfall, as Janna's quick acceptance of Callie being far beyond redemption drove her to cut the rope, with the shocked villainess screaming as she fell to her death below. 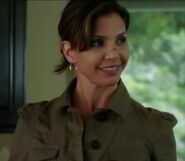 ...and locking the freezer, thereby preventing Tricia from escaping her death trap.

"Don't worry, honey; I'll stay with you until the end."

"Callie, we're friends!" Tricia begging for mercy after she realized the horrific fate that awaited her

Callie telling Tricia "the true story of... Callie Chalmers" without caring about her pleas or her desperate knocks against the freezer door

(laughing at her own wickedness) "So mean!"

...and unsurprisingly, it is revealed that her former friend and partner-in-crime has died.

"That'll do!" Callie placing alcohol bottles next to Tricia's corpse 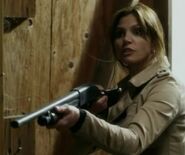 Callie pointing a shotgun at Janna
Add a photo to this gallery
Retrieved from "https://femalevillains.fandom.com/wiki/Callie_Chalmers_(Deadly_Sibling_Rivalry)?oldid=184789"
Community content is available under CC-BY-SA unless otherwise noted.