Start a Wiki
watch 14:21
The Loop (TV)
Do you like this video?
Calamity Jan (Dina Merrill) was the henchwoman in the 1966 two-part episodes "The Great Escape" and "The Great Train Robbery", for the TV series "Batman".

Jan was the devoted fiance of Shame (Cliff Robertson), and the willing and able lieutenant in his gang of modern-day desperadoes.

Jan and her mother Frontier Fanny (Hermione Baddeley), broke Shame out of prison.  They then assembled a new gang for him.  Calamity was well-armed with both pistols and rifles.

Together the pair looted Gotham City and defied all its authorities, particularly Batman (Adam West), Robin (Burt Ward), and Batgirl (Yvonne Craig).  Batman deduced that Shame meant to rob the Gotham City Opera House.  The caped crusader easily overpowered Shame and his men, but were surprised by Calamity Jan and Frontier Fanny, who used the gang's secret weapon, fear gas.  The powerful chemical quickly reduced Batman and Robin to helpless cowards, allowing Shame's gang to escape with the loot and a captive Batgirl.

Defeated, Batman and Robin returned to the Batcave, where Alfred cured their condition with Bat-Antidote-laced chicken soup.  Batgirl remained a hostage.

Later, when attempting to make his next robbery, Batman and Robin captured Frontier Fanny, setting a stage for a prisoner exchange.  Calamity Jan cared more deeply for her mother's well-being, even over her fiance's criminal ambitions.  For a time, Jan tried to temper the mutual dislike between her fiance and her mother.  When the latter was captured by the Gotham City Police Department, however, she begged the former for a rescue, even if it meant giving up a vital hostage.  Though strongly opposed, Shame eventually relented, and Jan was overjoyed to recover her mother.

Some time later, Jan and her mother helped Shame steal more than fifty million dollars from a Federal treasury train.  While she hoped to retire in peace with this loot, her fiance insisted on one last confrontation with Batman.  Jan obliged and almost killed the Caped Crusader, but was ambushed at the last second by Batgirl and Robin, and sent to the women's penitentiary.  Shame and the rest of the gang were easily defeated by Batman and his gang. 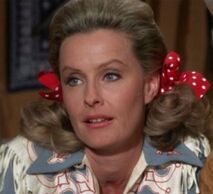 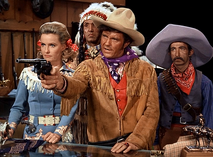 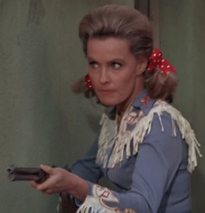 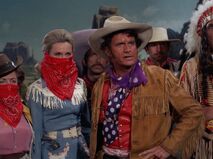 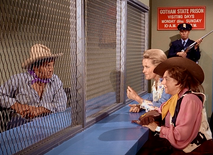 Add a photo to this gallery
Retrieved from "https://femalevillains.fandom.com/wiki/Calamity_Jan_(Batman)?oldid=173598"
Community content is available under CC-BY-SA unless otherwise noted.