"You've forgotten why you take orders from me. Perhaps if you stop wagging your tongue long enough, you'll remember... Behave and I might give it back to you in a few days."
―Byleth after ripping out Braathwaate's tongue.

Byleth is a major antagonist who appears in the CrossGen Comic Route 666 who is tracking the main protagonist Cassandra Starkweather.

She makes her first appearance in Route 666 Chapter 8 as one of the Board of Directors. She, along with the rest of her squad, disguise themselves as FBI agents assigned to take the insane mass-murderer Cassandra "Cassie" Starkweather into custody. In reality Cassie was a powerful psychic who could see past the veil into the monster world that both existed alongside and inside the normal one.

Byleth along with the rest of her associates fearing that keeping Cassie alive would eventually expose them, decided to silence her before she could get that far. Intending to take her alive, Byleth and her squad arrived at the Sheriff's house where Cassie had been hiding out under the pretense of arresting her. 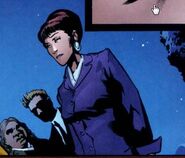 Add a photo to this gallery
Retrieved from "https://femalevillains.fandom.com/wiki/Byleth_(Route_666)?oldid=158399"
Community content is available under CC-BY-SA unless otherwise noted.