The Female Villains Wiki
Register
Don't have an account?
Sign In
Advertisement
in: 1980s, Axe, Bare-Handed,
and 17 more

Muay Thai champion Saskia Van Rijswijk plays a sexy, butch henchwoman in the 1989 film "China White". The film is about a drug war between the Italian Mafia and the Chinese Mafia in Amsterdam. Saskia is the driver, bodyguard, and henchwoman for Scalia, the head of the Italian mafia. Her demeanor is masculine, tough and menacing, with dark glasses, short hair, big gloved hands and a severe suit cut to emphasize her height and broad shoulders, while concealing her breasts.  She could easily be mistaken for an athletic young man.

Her womanhood is confirmed, however, in an interrogation scene under a bridge at night.  Scalia is trying to get information from a Chinese gang member, without success, and then we see a pair of beautiful legs on high stiletto heels approach from the distance.  The camera slowly pans upwards gradually revealing a fit female body in a black dominatrix outfit.  As it pans further upward we see a long, delicate neck and the emotionless face of the henchwoman.  Although she appears as a sexy female, she is not feminine. She is a powerful, disciplined weapon ready to unleash incredible destructive force.  She looks at her boss and then she snaps a kick into her victim that throws him over backwards on the chair he is tied to. Another henchman picks up the chair and she drives another kick into his midsection and then stands, still emotionless, in a military "at ease" posture awaiting further instructions.  The victim still won’t respond to Scalia, so he hands a fire ax to the henchwoman and she quickly kills him off-screen. As Scalia leaves, she walks off, erect, emotionless.

At the end of the film, she drives Scalia to a rendezvous by a docked ship and stands guard in her suit carrying a small machine gun as she opens the car door. The Chinese gang was there, heavily armed, as were the police, and a wild gunfight breaks out. The henchwoman exchanges shots across the ship with a Chinese policeman. She ditched the restrictive coat and sunglasses along the way and we see her opponent, gun at the ready, searching for her in front of a window.  Suddenly the henchwoman explodes through the window feet first right into the cop’s shoulder, spinning him around and disarming him.  Her masculine power and aggression is at its height as she presses her attack on the hero.  She seems as tall as him, and her attack is relentless.  It’s easy to believe that she could destroy him.  She keeps him on the defensive, punching with those big gloved hands and deadly powerful kicks.  He absorbs a few blows, but is quick enough to duck or deflect others. She easily blocks his attacks. Perhaps she is trying too hard to finish him quickly when she throws her body into a brutal punch and then a kick that shatter two more windows, but that he easily ducked.  Regardless of her masculine demeanor and superbly athletic fighting skills, her slim female body is beginning to tire and slow.  The hero manages to rise and attack again.  She trades punches to the face with him like any tough guy, but his punch throws her head back and moves her back a step. He tries to kick her, but she easily catches his kick, throws a damaging elbow into his thigh, and then head-butts him. Her head butt was off target and he immediately blasts her in the face again and she is thrown down.  She catches herself with those strong, gloved hands and begins to raise herself but, for the first time, her face shows something other than focused aggression: it flashes fear and pain.

Full of anger, and realizing that she is down, but not finished, the hero brutally presses his attack.  He heaves her to her feet by her shirt and, as she spins, her shirt rips.  Her athleticism allows her to catch her balance and run towards a stairway.  She turns to run up the stairs and he boots her in the chest, throwing her back into a railing.  She recovers and dashes up the stairs, avoiding his next kick, and she dashes out onto a helipad.  The cop is faster than the wounded henchwoman and manages to kick her from behind.  She goes down, but throws herself into a roll and rises facing her adversary in time to partially block his next kick. He throws a punch at her face, which she easily blocks, but she is not quick enough to stop the left fist to her gut. She steps back and trips over the edge of the helipad, yelling as she falls to her probable death in the sea. 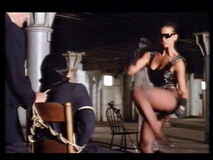 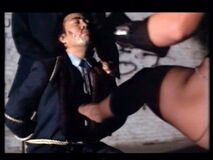 Masculine again for the final battle

Firing at her adversary

She boots him to the fence

Focused intensity as she strikes

Looking more feminine as she absorbs the first blow 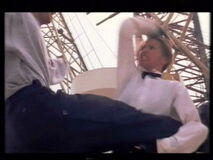 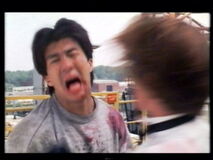 Punched to the ground

He kicks her chest

She blocks his punch

She can't block the gut punch
Community content is available under CC-BY-SA unless otherwise noted.