Start a Wiki
watch 01:51
The Loop (TV)
Do you like this video?
Bubbles is a villainess from the cartoon Plastic Man, she appears in the 1979 episode The Hippotist. Plastic Man is a segmented show from the animated series The Plastic Man Comedy Adventure Show.

She is a minion of The Hippotist, a villainous hippo who has the ability to hypnotise people, but desires even more power. Bubbles dresses in a safari like outfit that consists of a very short skirt and brown boots.

The Hippotist hypnotises various bank managers to rob their own banks and return the stolen loot to him and Bubbles. He has his eyes set on the Nairobi Ruby, which could give him even greater power and the ability to put everyone in a trance and rule the world. Bubbles is more than happy to go along with his plan, especially when The Hippotist is very generous with how much of the stolen loot Bubbles herself is allowed to have.

After Plastic Man turns up at the villains’ lair, The Hippotist traps him in a glass case and has a gas sprayed on him that turns him into “plastic jelly”. Bubbles herself is given the pleasure of turning the wheel that unleashes the gas on the trapped hero. Plastic Man is then placed on the top of a volcano in his new stretched out form, with The Hippotist planning on the volcano erupting on the hero and killing him. The villains fly off in a helicopter to try and gather the Nairobi Ruby, leaving Plastic Man in his perilous position.

At the African Embassy, The Hippotist and Bubbles walk in and get a hypnotised guard to lead them to the safe holding the ruby. The Hippotist goes to open the safe, but it turns out it is Plastic Man disguised as the door, having escaped from the volcano death trap earlier. The villains immediately flee from the situation, but are ultimately captured and arrested for their crimes. 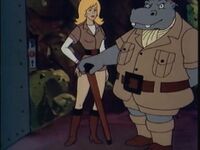 The Hippotist and his evil minion Bubbles 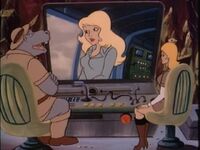 They spy on the heroes through a hidden camera 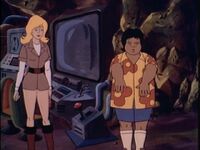 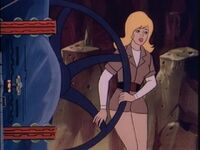 Bubbles turns the wheel that activates a gas 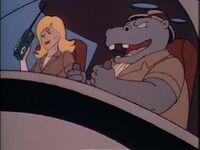 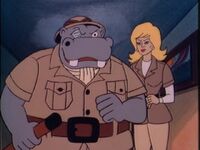 The villains enter the African Embassy... 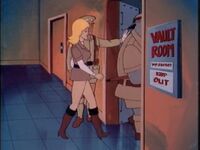 ...and are led to the vault room by a hypnotised guard 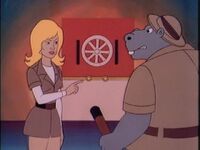 The door to the safe holding the ruby... 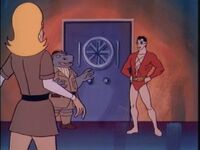 ...is actually Plastic Man in disguise! The villains are captured
Add a photo to this gallery
Retrieved from "https://femalevillains.fandom.com/wiki/Bubbles_(Plastic_Man)?oldid=83282"
Community content is available under CC-BY-SA unless otherwise noted.