The Bubble Gum Sisters (バブルガム・シスターズ) are villainesses from episode 34 of the anime Brave Police J-Decker (勇者警察ジェイデッカー).

They are two programmers who decide to have some fun by manipulating Power Joe, a member of the robotic Brave Police. They send out signals which cause Joe to attack his fellow Brave Police team mates, thinking they are enemies. One sister seems pleased that they've managed to manipulate Joe into attacking his team mates, but the other says she won't be satisfied until he destroys them. They also play with his heart by making him think he's fallen in love with a beautiful nurse robot, when in reality these are just visions of his.

Their reasons for doing these things was purely for a bet with each other, to see if they could control his heart, seeing it as merely a program rather than an individual personality. They cruelly reveal this to Power Joe which upsets him.

They attempt to leave once its revealed they are behind everything, but Power Joe and his team manage to bring them to justice by shooting the ship they pilot down. They are then arrested. 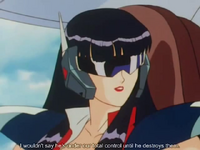 The sisters are arrested for their crimes

The sisters are arrested for their crimes
Add a photo to this gallery
Retrieved from "https://femalevillains.fandom.com/wiki/Bubble_Gum_Sisters_(Brave_Police_J-Decker)?oldid=182535"
Community content is available under CC-BY-SA unless otherwise noted.