Bruno is a Neo-Nazi woman who once worked for the Joker mainly as a muscle for hire. One of Batman's more obscure enemies, nowadays she is arguably best remembered for the distinctive pair of red swastikas tattooed on her breasts and glutes.

All Star Batman and Robin Edit

Bruno was shown to be a very skilled unarmed combatant being able to hold her own against Batman for a brief amount of time.

In other media Edit

Bruno makes an appearance in the animated film version of Batman: The Dark Knight Returns. 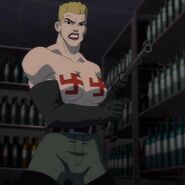 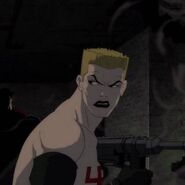 Add a photo to this gallery
Retrieved from "https://femalevillains.fandom.com/wiki/Bruno_(DC_Comics)?oldid=201591"
Community content is available under CC-BY-SA unless otherwise noted.