Start a Wiki
watch 01:51
The Loop (TV)
Do you like this video?
The unnamed Brunette Vampiress (Aleksandra Rastovic) was the villainess of the Backstreet Boys' music video, Straight Through My Heart (release date August 27, 2009). The video opened with a brunette woman riding a motorcycle up to a nightclub, taking off her helmet and leather jacket before going inside.

As the woman surveyed the party, it was slowly revealed that the brunette was a vampiress, with this being firmly revealed when she flashed her fangs at a biker she approached. Afterwards, the vampiress invited a blonde woman to join her on the dancefloor, bearing her fangs against to reveal the villainess' intent to claim the blonde as her victim.

However, as the women continued to dance, water (potentially holy water was dumped on the crowd of dancers, after which Nick Carter--member of the Backstreet Boys, who had been peforming at the club throughout the video--led the vampiress onto the stage before he and the rest of the band took her into an elevator. After bringing her to another room, Nick opened a door to the outside and shoved out into the sunlight, destroying and killing the evil vampire and revealing him and his band to be Day Walkers, a group who worked to protect mortals from vampires who hunt for their prey in bars or nightclubs. 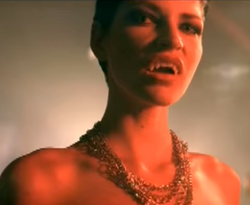 The vampiress bearing her fangs in her villainous reveal 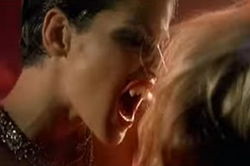 The vampiress preparing to attack her blonde victim

Retrieved from "https://femalevillains.fandom.com/wiki/Brunette_Vampiress_(Straight_Through_My_Heart)?oldid=154553"
Community content is available under CC-BY-SA unless otherwise noted.