Start a Wiki
watch 01:50
The Loop (TV)
Do you like this video?
The unnamed muscular woman and her personal trainer Brenda are protagonists in the 2014 webcomic "Taking What's Theirs" by momuscle1975.

The comic begins with the trainee having invited Brenda to an elegant party. There, she finds herself seated next to a thin and hag-like woman who happens to be wearing the same dress as her. The hag's lawsuit attorney, a young scrawny girl with glasses named Debbie, is also in attendance at the party.

The hag is stunned as she watches Brenda walk over to Debbie's table and callously dump a glass of wine on the girl's chest. She is further shocked when Brenda pulls her huge breasts out of her dress and begins performing paizuri on the man seated with Debbie. Once finished, Brenda demands that the attorney immediately clean the ejaculate from her breasts and proceeds to viciously abuse her with them.

Once fully cleaned, Brenda tears away Debbie's dress and begins to brutally pummel the weak girl while verbally degrading her. After delivering countless punches, Brenda splashes water to bring Debbie back to consciousness and then destroys her right breast with her strength before continuing the assault. After forcing the girl to admit her physical inferiority, Brenda gives one final blow, knocking Debbie's broken and bloodied body out into the street. Brenda then celebrates by flexing her amazing muscles in a display of dominance over her victim.

The trainee, who had excitedly cheered Brenda on throughout the whole event, becomes greatly inspired and begins to degrade and brutalize the hag. Insulted that the thin woman would dare to wear the same dress as her, the trainee punches her straight out of it, and then strips completely naked herself to display her incredible physique and to add literal insult to the hag's injury. Having zero doubts about who has the more beautiful breasts, the trainee forces the hag to suck her nipple - giving her a few more slugs in the process - and then begins having sex with the hag's husband right in front of her.

The trainee ends the spectacle by tossing the hag's body into a nearby trash bin and then punching the woman further down into it. Impressed, a third unnamed muscular women then asks the trainee if she can take care of her own romantic impediment. Happy to oblige, the trainee lifts the trash bin and and launches it straight at the skinny blonde, sending both her and the hag out into the street with Debbie, who is still bleeding into the gutter. Victorious, the final page displays the contrast between the three muscular beauties and those who dared to set their sights on men who they are entitled to. 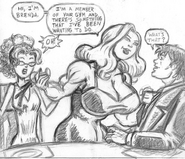 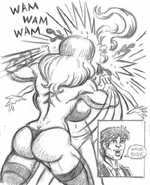 She then shows Debbie what being a "real woman" is all about.

The trainee gets her turn next.

Another muscular woman volunteers victim #3.
Add a photo to this gallery

Full gallery: Brenda and Her Trainee (Taking What's Theirs)

Retrieved from "https://femalevillains.fandom.com/wiki/Brenda_and_Her_Trainee_(Taking_What%27s_Theirs)?oldid=207319"
Community content is available under CC-BY-SA unless otherwise noted.