Borden is a villainess from Zoot Comics #10. She appears in the Rulah, Jungle Goddess story The Frenzy Of The Dishonored Idol.

She is referred to as 'Memsahib' by the natives, which is a term used respectfully to address a white woman of high class status. Borden is presumably her surname.

She has two natives, a man and a woman, work with her to steal some precious rubies. Firstly she has the woman make her look like the heroine Rulah. Throughout the story she appears to many characters as an evil version of Rulah.

She takes advantage of her apperance by making natives carry her around, and eventually ends up stealing the rubies from the idol and escaping with them, but not before murdering her two native accomplices with a pistol so she can keep the riches to herself. She also shines a blinding light into the real Rulah's face which causes her to fall from a great height.

Later on Borden thinks she has successfully escaped and temporarily rests on a rocky path, only to be attacked by a giant ape. Rulah, who has managed to come around from her earlier setback, overhears this and saves her evil imposter from the ape by killing him. Some tribe members show up and grab a hold of Borden. Rulah tells them to punish her as they please, and her fate is left a mystery as she is dragged away. 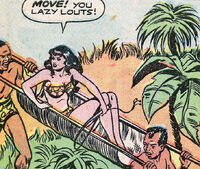 Berating the natives for their lack of speed

Angry at her male native accomplice, she betrays him with a gunshot 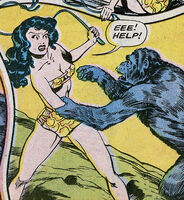 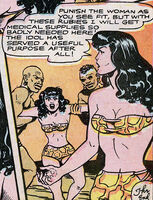 Left to the mercy of the natives
Add a photo to this gallery
Retrieved from "https://femalevillains.fandom.com/wiki/Borden_(Rulah,_Jungle_Goddess)?oldid=160484"
Community content is available under CC-BY-SA unless otherwise noted.