At the beginning of the episode, we see Boots and her partner, Murphy (Shaun W. Loeser) in the underground parking garage ready to ambush Superseven (Jerry Kokich).  Boots and Muprhy are assassins for the criminal network T.H.E.Y.  Boots makes reference to Anya (Anna Bazarkina), who failed her mission to assassinate Sandra West (Olivia Dunkley) in episode 9 "Operation: Get Sandra West!".

Suddenly, Sandra appears and shoots Boots in the stomach and then her partner Murphy.  Sandra stands over the top of her, and when Boots goes for her gun again, she shoots her again.  This time it finishes off the beautiful spy. 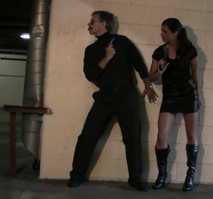 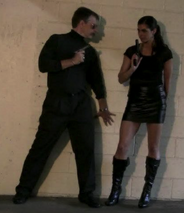 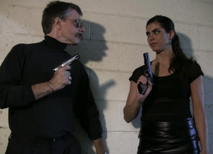 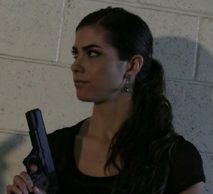 Add a photo to this gallery
Retrieved from "https://femalevillains.fandom.com/wiki/Boots_(The_Adventures_of_Superseven)?oldid=150368"
Community content is available under CC-BY-SA unless otherwise noted.