Boodikka was approached by Sinestro and agreed with his vision for a new order. She used her talents to try to find others to join their cause. Boodikka appeared to be concerned for Jordan's well being and took the opportunity to read his mind but couldn't make a conclusion. When Jordan figured out the truth, Boodikka revealed herself and went about killing Kilowog and Jordan while Sinestro went to retrieve the Yellow Element. Without a ring, Jordan improvised and tricked Boodikka into shooting at the Energi-Rod. The unstable core detonated and Boodikka was shot back into sharp medical implements. In her dying breath, she was disgusted to be killed by a human. 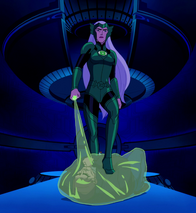 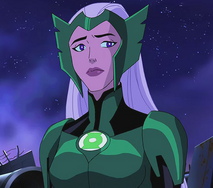 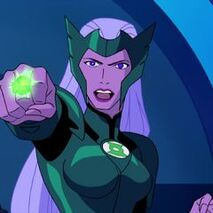 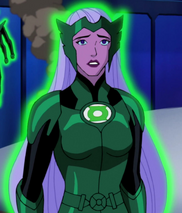 Add a photo to this gallery
Retrieved from "https://femalevillains.fandom.com/wiki/Boodikka_(Green_Lantern:_First_Flight)?oldid=175822"
Community content is available under CC-BY-SA unless otherwise noted.