Bonnie Valin is the wife of wealthy plastic surgeon Elliot Valin, and at a gathering celebrating Elliot being named Doctor of the Year, it was revealed that Bonnie was among his many patients. Part 1 sees Elliot killed in his office by an overdose of laughing gas, and following the murder, Bonnie went from a grieving widow to becoming a suspect in his murder. She was later arrested after a hose was found in the garage, and during her interview, Bonnie revealed that Elliot's son (and Bonnie's stepson), Roger, was the heir to his fortune.

Bonnie also claimed to Mark Sloan (who was a friend of the couple) that she was out at the beach at the time of the murder, and during her trial, Mark brought in a photo of Bonnie at the beach with a man named David McDonnell. The photo was used as proof in Bonnie's favor, and Bonnie ended up acquitted. Roger, whose story about his whereabouts was shaky, ended up arrested for his father's murder. However, in the near end of the episode, Mark looked at the photo again and realized it was photoshopped, and also learned that there was high tide at the beach that day, while the photo shows that it was calm.

Part 1 ended with Mark confronting Bonnie about the photo, and in response, Bonnie turned heel and boldly admitted to killing Elliott. Bonnie's villainous confession continued in Part 2, where she stated that her husband was a crushing bore, so using laughing gas to kill him was a benefit to him, while also showing pleasure over inheriting his wealth. It was also revealed that Dave was Bonnie's illicit lover, and she helped provide Bonnie's phony alibi. The callous villainess thanked Mark for helping her get acquitted, while reminding him that the double jeopardy law prevents her from being tried for her husband's murder ever again.

Despite this, Mark continued to plague Bonnie, beginning with helping file a civil suit that prevented Bonnie from receiving her inheritance outright. After Mark visited her again, the evil Bonnie decided to eliminate Mark, and sent Dave to kill him. Dave used the same method that Bonnie used to kill Elliot:  laughing gas. Bonnie later killed Dave (with the use of rat poison) to tie up loose ends, doing so under the belief that Mark was eliminated, but in actuality, Mark was saved by Delores Mitchell and Norman Briggs.

In the conclusion's climax, Mark found out that Dave was deceased when he found Dave's jersey in the dumpster, and after this, he tricked Bonnie with a photo of Dave at a convenience store. Mark stated that Dave was alive and that he was rolling over on Bonnie, who disbelieved the claim and planned to hop a plane overseas, all while showing no remorse for leaving her stepson in jail. However, Bonnie was later shown driving to the area where she buried Dave, and did some digging to check if the body was there. After seeing that Dave was still buried there, Bonnie ended up encountered by Mark and Steve Sloan, and attempted to deny killing her lover. Mark revealed that the photo he showed her was fake, and after Bonnie realized that she had been duped, she was arrested by Steve. Even then, however, Bonnie still tried to convince Mark that she was innocent, and pleaded with Mark to help her. 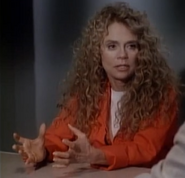 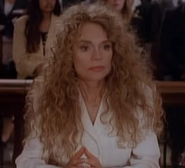 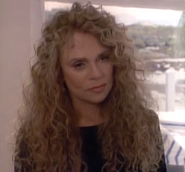 Add a photo to this gallery
Retrieved from "https://femalevillains.fandom.com/wiki/Bonnie_Valin_(Diagnosis_Murder)?oldid=170145"
Community content is available under CC-BY-SA unless otherwise noted.