Bonita (Nadja Regin), is a minor henchwoman in the 1964 James Bond film "GoldFinger".

Bonita is a young woman from Turkey, who dances the tarantella (Spanish dance) at the El Scorpio nightclub in Mexico. In addition, she works with Mr. Ramirez, a major heroin smuggler who works nearby.

After James Bond (Sean Connery) blows up Ramirez's heroin lab, he visits Bonita at the club. She wears a white and black top and bottom dress with flowing ruffled skirt. She has pink flowers in her hair. After her dance is over, Bond enters her dressing room and she exits the bathtub to greet him.

It appears that Bond and Bonita know each other from a previous encounter, as the two embrace and begin to kiss. When she pulls away complaining that his gun is hurting her. She then asks why he always has to wear it and Bond replies by saying he has a slight inferiority complex.

Bonita then double-crosses Bond by setting him up to get hit on the head. She attempts to distract him, but Bond sees the assassin Capungo (Alf Joint) in the reflection of Bonita's gorgeous eyes. Bond quickly spins around which ensures Bonita is hit on the head instead of him.

A fight ensues between Capungo and Bond. This fight is ended when Capungo falls into the bathtub filled with water. Bond hurls an electric fan into the water killing him as he attempts to reach for Bond's discarded Walther PPK in the holster.

Bonita survives her injuries, but Bond leaves her lying on the floor against the wall with a severe headache, and is heard saying "Shocking, just shocking". We do not see Bonita in the film again. 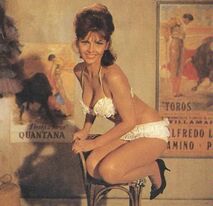 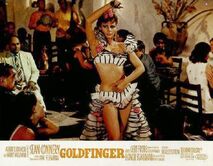 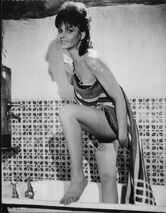 Something in her eyes...

At last: Bond leaves Bonita in her shame and defeat... probably he consulted the local police to arrest her...

Bond leaves Bonita in her defeat...
Add a photo to this gallery
Retrieved from "https://femalevillains.fandom.com/wiki/Bonita_(Goldfinger)?oldid=197647"
Community content is available under CC-BY-SA unless otherwise noted.