Steven Colin (Daniel Bernhardt) is an ancient Macedonian warrior who has been reincarnated to do battle with a sinister Mongolian clan led by Parmenion (James Hong).  Colin has in his possession the sword of Alexander the Great, and all of his enemies from his past are back and determined to seek the man who would be king and destroy him for all eternity.

Boi is the henchwoman of Parmenion.  She first appears in a bath house when she shoots up the place with a pistol.

Colin is captured by Parmenion and his gang and tortured.  However, Boi takes a liking to Colin, and attempts to seduce him.

Boi later kidnaps Cory Lee Harris (Meeka Schiro), who is Colin's girlfriend.  She takes Cory to an elevated scaffolding, and the two engage in a short catfight.  Cory is able to knock Boi over the edge, and she lands on spikes on the ground.  Boi's body mysteriously lights up with an electrical force before vanishing. 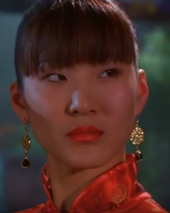 Add a photo to this gallery
Retrieved from "https://femalevillains.fandom.com/wiki/Boi_(G2:_Mortal_Conquest)?oldid=147398"
Community content is available under CC-BY-SA unless otherwise noted.