Start a Wiki
watch 01:50
The Loop (TV)
Do you like this video?
Bobbie Burton (Corinne Bohrer) is the main villainess from Diagnosis Murder episode 1.12:  "Reunion With Murder" (airdate February 4, 1994). She is a talk show host and an old college classmate of Amanda Bentley.

Bobbie Burton's backstory revealed that she had an affair with her married teacher, Professor Edwards. During Mark Sloan's investigation, he encounters Bobbie at the set of her talk show, which had Bobbie admitting to the affair and saying she broke it off; claiming that Edwards killed himself in heartbreak. In actuality, Edwards was the one who ended the relationship, because he was in love with another woman:  Nancy Barlow, Bobbie and Amanda's college classmate. Upset over this, Bobbie threatened to commit suicide by jumping off a building, only to be stopped by Edwards. Bobbie took the opportunity to push Edwards off the building, killing him in a furious rage.

Years later, all of the details of Bobbie's affair would be revealed in Nancy's tell-all book; which would be written as payback for a prank that Bobbie, Amanda, and two other classmates pulled on her. In order to keep her dark secret hidden, the evil Bobbie killed Nancy, and as a result, Amanda ended up accused of the murder. After killing Nancy, Bobbie relentlessly searched for Nancy's manuscript both at the scene of the crime and at Amanda's home, but coming up short both times.

Bobbie lured Amanda out of her home by also luring Amanda's dog away, but she is caught by Mark, who turned on the lights and revealed Bobbie as a villainess. Mark gave his summation and also finds the manuscript; a floppy disk hidden in a CD case. Bobbie, still in her villainous disguise, pointed a gun at Mark and ordered him to hand over the disk, but she was stopped by Steve, who arrested her for murder. 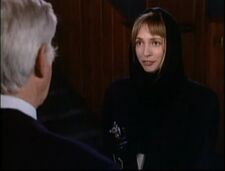 Bobbie points a gun at Mark and demands the manuscript... 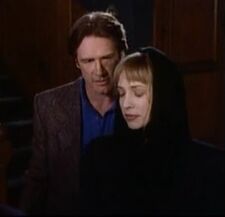 ...only for the villainess to be apprehended and arrested
Add a photo to this gallery
Retrieved from "https://femalevillains.fandom.com/wiki/Bobbie_Burton_(Diagnosis_Murder)?oldid=144883"
Community content is available under CC-BY-SA unless otherwise noted.