Start a Wiki
watch 01:51
The Loop (TV)
Do you like this video?
Blue Snowman was a supervillain from the DC comics.  She was depicted by Robert Kanigher and Harry G. Peter in National Periodicals' Sensation Comics #59,

Byrna Brilyant has a brilliant idea. Her father, a scientist, dies, and his invention, a blue snow that freezes whatever it hits, inspires her to profit as the Blue Snowman, using a telescopic snow ray to bury a whole farm town then offering an antifreeze, if they're willing to pay the price.

Unlike most villainesses, she hid her curves inside a rotund blue costume to convince everyone she was a man and continued to wear it even after she had been uncovered. Brilyant had no superpowers, but she was no pushover, and was one of the few women to escape from Wonder Woman's private penal colony, Transformation Island. 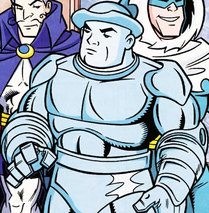 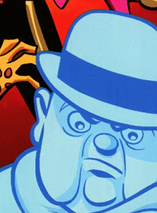 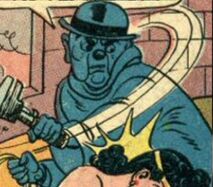 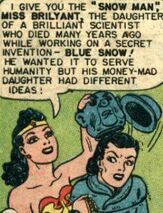 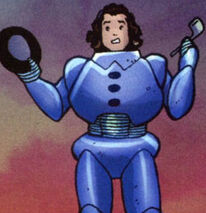 Blue Snowman back in her costume.
Add a photo to this gallery
Retrieved from "https://femalevillains.fandom.com/wiki/Blue_Snowman_(DC_Comics)?oldid=114890"
Community content is available under CC-BY-SA unless otherwise noted.