The Female Villains Wiki
Register
Don't have an account?
Sign In
Advertisement
in: 1960s, A Taste Of Her Own Medicine, Blonde,
and 17 more

The Blonde Casino Thief is an unnamed villainess who appears in a RUBBERMAN story featured in the UK SMASH 1970 annual (Odhams 1969).

Story -
A gang of crooks plan to rob a hotel casino. Rubberman, a guest at the hotel, overhears their plot. Up in the criminal's room, Rubberman, outside the window, uses his rubber limbs to grab the blonde and her male partner - but the croupier, who is the third member of the gang, uses gas in a cylinder to knock out the hero.

The gang proceed with their plan; the blonde and her partner breaking into the hotel office where the safe is, while the croupier causes a diversion at the tables. Perched on a desk, the blonde holds the canister of knock out gas ready for any intruders, while her partner starts to open the safe. But Rubberman, who has by now recovered, using a service hatch too small for a normal man, stretches his arms up into the room and unloosens the chandelier above the blonde, sending it crashing down over her, causing her to drop the gas canister and trapping her.  After knocking down her partner, Rubberman uses the villain's own gas to knock out the two crooks. Rubberman then goes after the croupier, who flees out onto a ledge outside the hotel - which breaks under his weight. Rubberman's amazing rubber arms save the crook from falling to his death. The 3 criminals are loaded into a police van as the hotel owner congratulates Rubberman on saving his money.

Appearance - A pretty blonde in a red dress

Weapons - A canister of knockout gas

Note - Rubberman (Jim Hollis) was a regular hero character in a strip carried by the SMASH UK comic in the late 1960s. He was a man who had his body changed to some sort of living rubber (very like Mr Fantastic from the American "Fantastic Four") by an Indian fakir's curse. 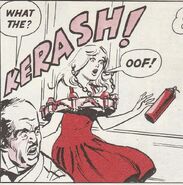 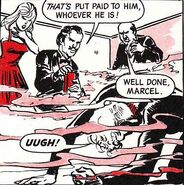 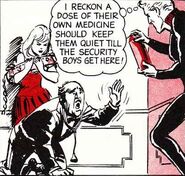