Start a Wiki
watch 01:51
The Loop (TV)
Do you like this video?
Blanche Noir appears in the Cliffhanger imprint comic book High Roads (2002). The story follows an unlikely foursome at the end of World War II who are inadvertently drawn together to stop Hitler's final plot. The group encounters Blanche Noir, a former member of the French Resistance, who defected to the Nazis because she thought the Nazis would win the war. She was involved in a plot to flood the polar ice caps, leaving only Nazi followers. While explaining the evil plan, one of the group kills her with throwing stars.

Pics for High Roads #4 & 5. Pics have been modified from original. 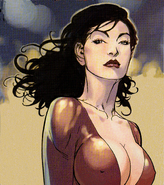 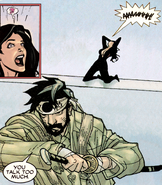 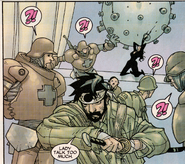 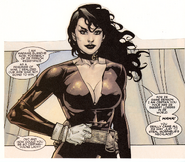 unmodified scan
Add a photo to this gallery
Retrieved from "https://femalevillains.fandom.com/wiki/Blanche_Noir_(High_Roads)?oldid=200069"
Community content is available under CC-BY-SA unless otherwise noted.