Start a Wiki
watch 01:48
The Loop (TV)
Do you like this video?
Blake Noland, aka Blake Miguel (Freya Tingley), is the main villainess from the 2017 Lifetime film, The Wrong Nanny (alternately titled, Her Forgotten Daughter; airdate December 29, 2017).

Blake is the biological daughter of now-married Stella Armstrong, who gave birth to Blake while her mother was ailing from pancreatic cancer. Following the death of her mother, Stella gave Blake up for adoption, feeling that she couldn't give Blake the life she deserved. Blake was adopted by the Miguels, but as she got older, she became unhappy and had abandonment issues.

Blake also had a psychotic history; after her relationship with her boyfriend, Oliver, ended, she began stalking him. She also destroyed a car belonging to a girl who was dating Oliver, and it was those actions that led to her being put on medication (which she wasn't taking). Blake was finally told about her adoption, and a month prior to the events of the film, she found Stella's contact information.

Blake was shown with a man who helped her search for Stella, and she later killed him shortly afterwards; stabbing him to death with a knife. She went to Oliver and told her about finding her birth mother, only for Oliver to brush her off and leaving her dejected that he had a new girlfriend, Kristen. Blake began the process of maneuvering her way into Stella's life and home, while also vandalizing Kristen's car in the process. She managed to become the live-in nanny to Stella and her husband Tanner's infant twin boys; and was hired due to good referrals (which Blake made herself by posing as a number of Stella's acquaintances).

Blake acted charming at first, even helping Stella get her way regarding her presentation for pancreatic cancer research by blackmailing Meredith Woodley over her extramarital affair. However, Blake's  jealous and psychotic nature began to surface when she saw Stella with Julianna Tyler, the daughter of Tanner's good friend, Walt Tyler. The twisted villainess had to cover her tracks when she saw Stella talking to Shelly Matthews, one of the women Blake posed as in the referrals, doing so by causing a distraction that led Stella to the boys. She later attacked and tied up Shelly in her home, and later on, Stella and Blake conversed over their personal lives, with Stella revealing the truth about her daughter. Without letting her know directly, Blake lashed out at Stella for "abandoning" her daughter, and she later had a psychotic fit, tearing up bedsheets with a knife.

The next day, Blake apologized for her actions, but she continued to harbor bitterness towards Stella and her family as a whole. After the couple returned home to find the boys abandoned, Stella confronted Blake, who later revealed herself as Stella's daughter. Stella's explanation and attempts to help Blake fell on the psychopath's deaf ears, as Blake again lashed out at Stella and ran off. Blake followed Stella to her adoptive parents' home, where her villainous past was revealed, and in the film's climax, Blake attacked Walt and Julianna during Stella's party, and also hid the twins in another room. Stella found Blake in the boys' room, and it was there that Blake attempted to kill Stella with a knife, forcing Stella to hold the villainess at gunpoint. Another struggle ensued, and after Blake was subdued, she was taken away and arrested by police.

Three months later, Blake is shown in a mental institution receiving her medication, only to spit out her pills and take out a drawing of the Armstrongs that she made with crayon. The film ends with Blake continuing to color the drawing (which includes herself), while flashing a maniacal gleam. 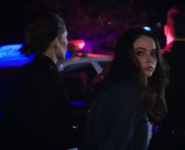 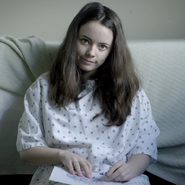 Blake in a mental institution
Add a photo to this gallery
Retrieved from "https://femalevillains.fandom.com/wiki/Blake_Noland_(The_Wrong_Nanny)?oldid=177509"
Community content is available under CC-BY-SA unless otherwise noted.