Black Widow (originally known as Spider Woman) was one of Space Ghost's villains. She controlled a planet full of spider-like aliens, who could emit energy that would turn into webs and many times she has tried to have them kill Space Ghost. He has defeated her every time. The Spider-Woman/Black Widow appeared on Space Ghost six times. She is one of the members of the Council of Doom in the final episodes.

In Space Ghost Coast to Coast, she seems to have professed love for Space Ghost much to the chagrin of the other villains. She is known for her scream that irritates Space Ghost.

At some point in her history, Black Widow got a blind date with Johnny Bravo.

In the Scooby-Doo, Where Are You? episode, Don't fool with a Phantom, Scooby-Doo and Shaggy Rogers are hiding from the Wax Phantom with a wax figure that looks like Black Widow. 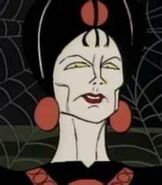 Add a photo to this gallery
Retrieved from "https://femalevillains.fandom.com/wiki/Black_Widow_(Space_Ghost)?oldid=158635"
Community content is available under CC-BY-SA unless otherwise noted.