Start a Wiki
watch 01:51
The Loop (TV)
Do you like this video?
Black Widow is the villainess in the 1949 episode "The Black Widow", which appeared on Plastic Man, which was produced by Police Comics #96.

Black Widow was a consultant for Gus Marty, the Gangland leader.  She used the Magic Crystal Ball of Kashir to see the future for his use.

Black Widow warned Gus not to follow through with a bank heist, telling him that the fates did not look good.  He went ahead and did the heist, and on the get-away, they were met with Plastic Man trying to return a dollar that flew out of the car.

After Gus and his men died in the car crash, Black Widow won over the rest of the gang members, by telling them if they followed her wisdom they would all be rich.  As a result, Black Widow took over the leadership.

She decides to rob the Ataman Jewel Galleries an exhibition of rare gems.  Her only warning the crystal gives her is to beware of rubber carpets.

In the heist, Black Widow and her men are on the way out the door, when they trip on a carpet, which turns out to be Plastic Man.  However, Black Widow used a syringe filled with poison taken from a Black Widow Spider, to inject into Woozy, Plastic's partner.  Because he had only two minutes to live, Plastic was forced to allow Black Widow to flee from the crime.

Later, Black Widow kidnapped Woozy and left a note for Plastic to meet her at her mansion.  When he arrived, Black Widow dropped a boulder on Plastic, but was able to squeeze out.  She then tried to use a saw blade on him, but once again it was foiled.  Lastly, she donned a gas mask and shot off deadly carbon monoxide gas at Plastic.  Plastic blew the deadly gas away.

The Black Widow then shot a gun that bounced off Plastic's chest and shot back at Black Widow.  The wound on Black Widow was just a flesh wound, however, she had coated the bullet with a concentrated Black Widow poison, that she claimed would "kill a regiment". 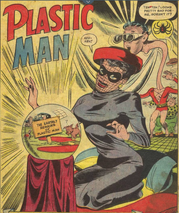 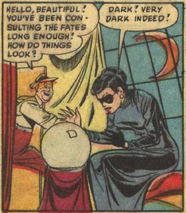 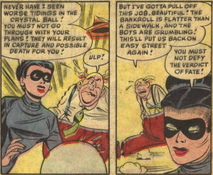 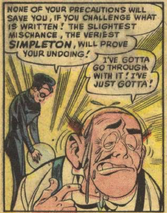 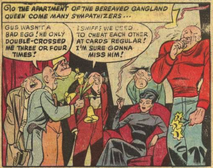 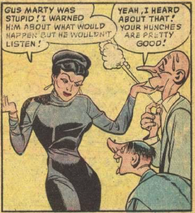 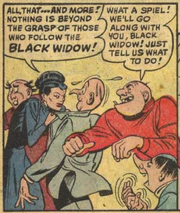 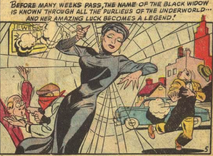 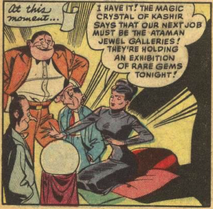 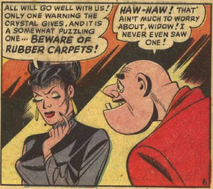 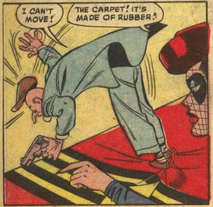 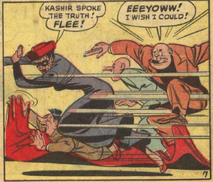 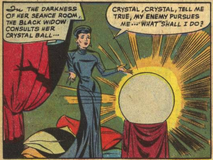 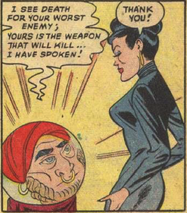 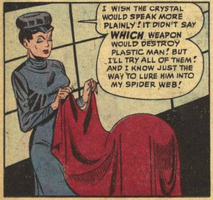 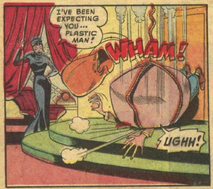 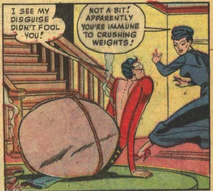 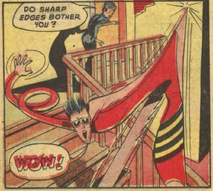 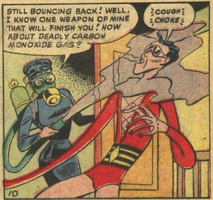 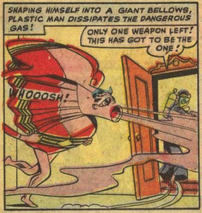 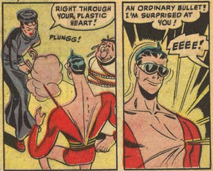 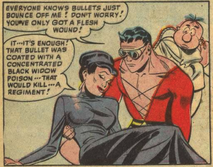 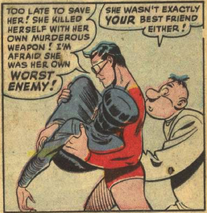 Add a photo to this gallery
Retrieved from "https://femalevillains.fandom.com/wiki/Black_Widow_(Police_Comics)?oldid=158448"
Community content is available under CC-BY-SA unless otherwise noted.