Start a Wiki
watch 01:48
The Loop (TV)
Do you like this video?
The Black Rose Gang are the main villainesses from the 13th episode of the 1990s version of The Flash, "Tina, Is That You?" (airdate February 14, 1991). They are a notorious all-girl gang which originally consisted of leader Harley Lydon, and her cohorts Janie Jones (Courtney Gebhart) and Shauna Duke (Denise Dillard).

The villainous trio was shown robbing Central City's Fur Exchange when they are later encountered by The Flash, who used the furs to subdue them and tie them up after Harley attempted to shoot him. Police arrive and attempt to arrest them, only for the gang to escape and attempt to make a getaway in their car. The Flash created a barricade to stop the trio, which resulted in Harley crashing the car into it. Janie and Shauna are saved by Flash, but Harley ended up killed in the crash. After the loss of their leader, Janie and Shauna are warned by Big Ed to find a new hideout due to reporters and police investigating their current one.

Later on, Janie and Shauna are approached by the heel-turned Tina McGee (her villainous persona caused by a bio-feedback experiment gone wrong), who uses her connection to The Flash to replace Harley as the gang's new leader. The trio committed a bank robbery and later abducted Lisa March, Barry Allen's blind date, in an attempt to draw out The Flash, who later appears and confronts the group. After being trapped with Lisa by the group, Flash escaped and unscrewed the tires of their getaway car, which fell off when Janie and Shauna attempted to escape with Big Ed (after Flash took off with Tina). At that moment, police arrived and arrested the two Black Rose members, along with Big Ed. 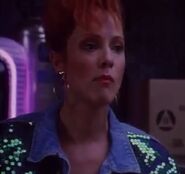 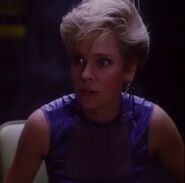 The second incarnation of the Black Rose Gang; with the evil Tina McGee as leader
Add a photo to this gallery
Retrieved from "https://femalevillains.fandom.com/wiki/Black_Rose_Gang_(The_Flash)?oldid=171079"
Community content is available under CC-BY-SA unless otherwise noted.