The Black Queen of Sogo (Anita Pallenberg), also known as the Great Tyrant, is the main villain in the 1968 film Barbarella. Her voice was dubbed by Joan Greenwood.

The main character Barbarella (Jane Fonda) finds herself trapped in a labyrinth outside the city of Sogo. While there she meets an old man named Durand Durand, who tells her about how Sogo is the most perverted city in existence. Later she runs into a couple of beggars who intend to do her harm. However, a one-eyed woman in a skintight black bodysuit stabs them from behind. We later learn that this is the Black Queen. She is wearing a leather outfit with black pants, black boots and red top. There is a missing circle pattern in her outfit that shows her bare stomach below her navel and just above her crotch. She has black opera gloves and a black choker necklace on. In addition, she has a single black eye patch over her right eye. She is carrying scissor knives in both hands, which she uses to kill the beggars. She attempts to seduce Barbarella.

Later Barbarella arrives at the palace. She is presented with a revolt, which is protesting the Queen. Barbarella learns the Queen happens to be the petite savior who rescued her earlier on the road. The Black Queen throws Barbarella into a giant birdcage where the birds peck off most of her clothes.

We learn that the Black Queen is a tyrant who suffers from insomnia. She enjoys torturing her prisoners to death. The Queen is now wearing a sheer outfit with black panties and top made out of black feathers. She also has a black cape and black high heels. Her arms are covered by opera gloves, and just above her ankles, she has sheer black material covering up to her knees where boots would normally occur. The strangest addition to her outfit is a single white horn coming out of her forehead just above her bangs. The Black Queen seduces Pygar, a blonde headed angel. She later dreams about him in her secret dream chamber.

The palace locksmith allows Barbarella into the Queen's secret room of dreams to assassinate her. However, once inside, he locks the door, trapping them both while the deadly dream energy swirls. The Queen begs Barbarella to save her in exchange for submissive sex. Here the Black Queen is dressed in another black costume, which includes black opera gloves and a black top with black boots. They then escape through a secret passageway in the Queen's bed.

The Queen takes Barbarella on a tour beneath her palace, which includes where scientists are working on new forms of torture. While there, they come upon Pygar (John Philip Law), a blind angel who has been bound in chains. Barbarella is irate, and attacks the Queen for this. She takes the Queen prisoner and frees Pygar. The three of them fly off into the labyrinth only to crash. Barbarella and Pygar reunite with Durand Durand.

The Black Queen is not defeated in the movie, but her kingdom is. 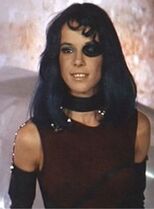 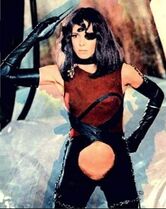 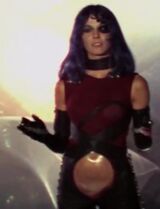 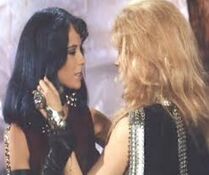 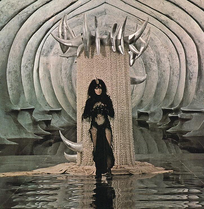 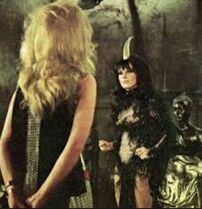 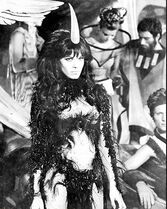 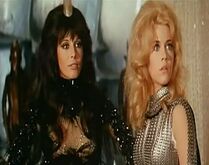 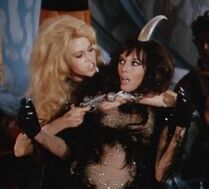 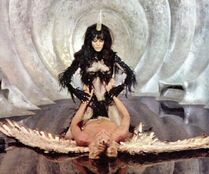 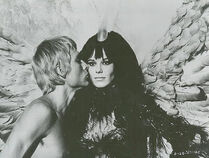 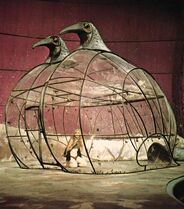 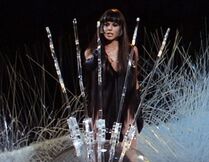 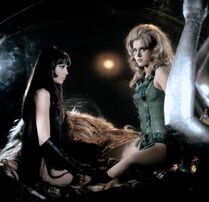 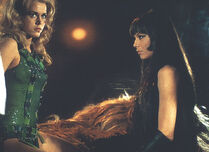 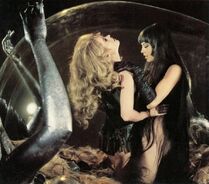 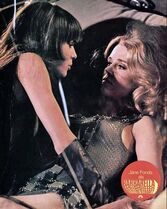 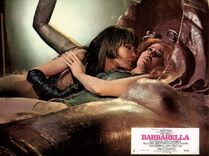 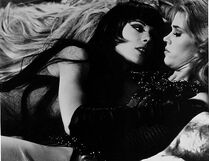 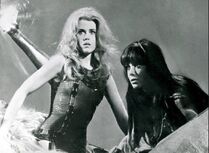 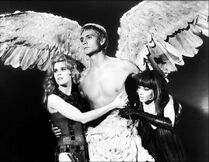 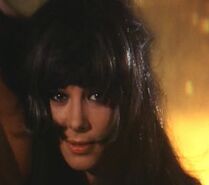 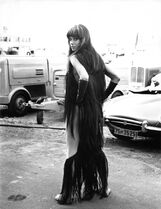 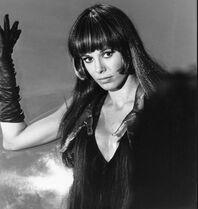 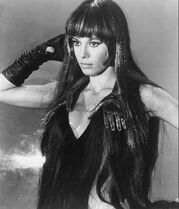 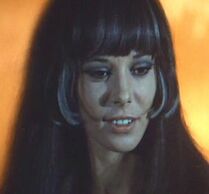 Add a photo to this gallery
Retrieved from "https://femalevillains.fandom.com/wiki/Black_Queen_of_Sogo_(Barbarella)?oldid=186869"
Community content is available under CC-BY-SA unless otherwise noted.