Horror novelist Bob (William Bates) and his girlfriend Shirley (Pat Barrington) are taking a night drive in search of an eerie graveyard that will hopefully inspire him to come up with his next story.  As they drive down the road, Bob accidentally drives the car over a cliff.

However, the next scene, shows the couple stumbling into an old cemetery, where the wild rituals are being conducted by The Dark Master (Criswell) and his faithful servants.  As they watch in the shadows, they observe the Master and the Black Ghoul begin to bring out the entertainment.

The show is more of an opportunity to show off burlesque dancing, as the couple is entertained by a series of dancers.  The Master who also is known as the Emperor, warns that if the night's entertainment fails to please him, he will banish the souls of the entertainers to eternal damnation.  The first one is a Native American (Bunny Glaser).  The second dancer is introduced as a street walker in life.

A third dancer is summoned, and she is a woman who worshiped gold above all.  The Golden Girl (also played by Pat Barrington) dances, and the Emperor instructs his loin-clothed servants to reward her with gold.  The servants place her in a cauldron with liquid gold, and all that emerges from the cauldron is a golden statue of the living woman who entered.

A werewolf and mummy appear and seize the intruding young couple.  They are brought before the Emperor, who decides to postpone their fate.  The intruders are tied up, side by side, and allowed to continue watching the dances.

The Black Ghoul introduces the fourth dancer, a Cat Woman (Texas Starr), who depicts a woman dressed in a leopard costume, which exposes her chest area.  As she dances, a servant follows her around and thrashes her with a bullwhip.

The Emperor next calls for a Slave Girl (Nadejda Dobrev) to be whipped for his amusement.  The slave wears a tunic and is chained to a wall.  Following her torture session, the Slave Girl breaks free and becomes the fifth dancer of the night.  Later, the Black Ghoul exhibits a fascination with Shirley and scratches a mark on her.  She draws a knife and seems about to kill Shirley, when the Emperor decides it is not yet time for the intruders to properly join them.

The Emperor is puzzled when a human skull appears instead of the next dancer.  The Black Ghoul explains it is the symbol of the sixth dancer, who loved bullfighting and matadors.  She used to dance over their demise, and now it is time to dance over her own.  The dancer of apparent Spanish/Mexican heritate (Stephanie Jones) appears to perform.  The Emperor and Ghoul briefly discuss the past of the dancer, who came to them on the Day of the Dead.

The seventh dancer appears dressed in Polynesian garments.  The Black Ghoul describes her to the mummy and the werewolf.

The Emperor expresses his boredom and demands "unusual" entertainment.  The Black Ghoul reminds her superior that they will be gone at the first sight of the morning sun.  They proceed to argue over the fate of Shirley.  The argument ends with the introduction of the eighth dancer (Barbara Nordin), a woman who murdered her husband on their wedding night.  She dances with a skeleton of her spouse.

The ninth dancer (Dene Starnes) was a zombie in life and remains zombie-like in death.  The tenth and final dancer (Rene De Beau) is introduced as one who died for feathers, fur, and fluff.  She starts her dance in clothing matching this style.  When the final dance ends, the Emperor finally offers Shirley to the Ghoul.  The Ghoul briefly dances herself as she prepares to claim her prize.

However, dawn arrives and with it sunlight.  The Emperor and all his undead are reduced to bones.  The final scene portrays Bob and Shirley waking up at the scene of the accident, surrounded by paramedics, suggesting it was all a dream. 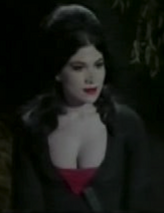 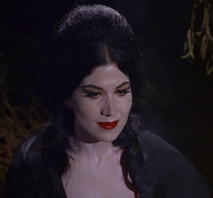 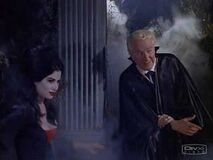 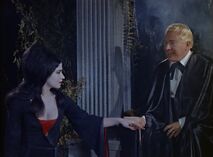 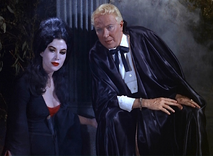 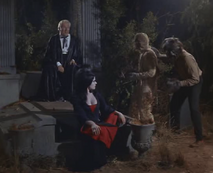 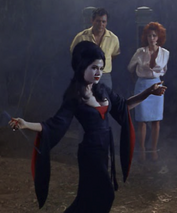 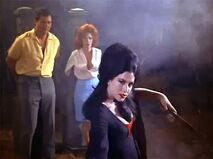 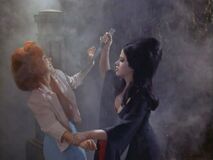 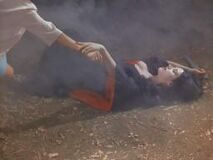 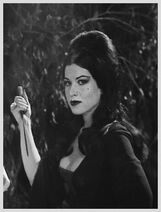 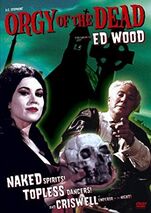 PDVD 327.jpg
Add a photo to this gallery
Retrieved from "https://femalevillains.fandom.com/wiki/Black_Ghoul_(Orgy_of_the_Dead)?oldid=120737"
Community content is available under CC-BY-SA unless otherwise noted.